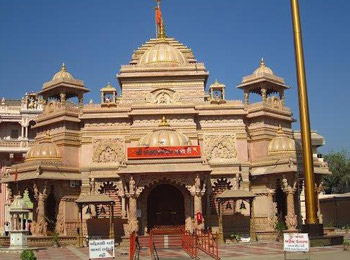 Sarangpoor Hanuman Temple is one of the sacred and holy temples in Swami Narayan Sampraday which was created by Guru Swami Narayan. It is situated in Sarangpoor village of Ahmadabad district in Gujarat. Lord Hanuman, the main deity of the temple is revered in the form of Kashtbhanjan i.e. remover of sorrows. Sarangpoor also known as Salangpoor houses the only Swami Narayan temple enshrining Hanuman as its chief deity. Sarang means Peacock in Gujarati. The Hanuman statue at the temple is a figure having a handlebar moustache, crushing a female demon under his foot, which is standing among sculpted flora full of fruit bearing monkey followers. Tuesdays and Saturdays are devoted to Hanuman. They are designated days for special rituals for those affected by mental illness, stress and other disorders.

Anjanaa who was actually an angel, named Punjikasthala, who, due to a curse, was born on the earth as a female vanar (monkey). Hanuman was born to Anjanaa. The curse was to be wiped away after giving birth to an incarnation of Lord Shiva. Anjanaa offered intense prayers to Shiva who granted her the boon. 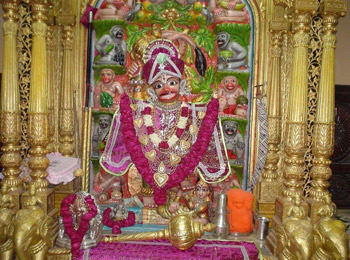 There is a famous well whose water is considered very holy. It is said that the statue of Lord Hanuman was found in this well three centuries back and the temple was constructed at the same place. Sarangpoor Hanuman Temple is famous around the world for eliminating spirits and Ghosts from people. Hundreds come to Sarangpoor at the feet of Hanuman to be rid of such problems. Many make it a point to begin their work only after visiting Lord Hanuman. They visit every Saturday to offer Pooja without fail.

Sarangpoor Hanuman Temple is considered to be very powerful. Gopalanand Swami invoked Hanuman, to be always present in the idol to drive out evils. While installing the idol Swami touched the idol with the rod that infused life into it and made it move. Now this rod has been painted in silver. In 1899, Kothari Gordandas of Vadtal appointed Sastri Yagnapurushdas to manage the affairs of the temple. Sastri Yagnapurushdas renovated the site, to its current state.

Hanuman Jayanti Mahotsav and Sundar Kand are the two major festivals celebrated in this temple.

Botad Railway Station is the nearest to Sarangpoor Hanuman Temple.

There are regular buses plying to Sarangpoor.