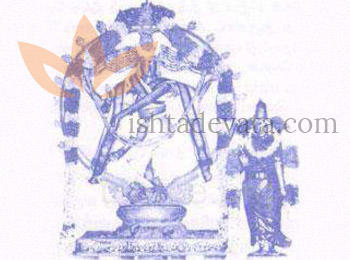 Lalgudi is situated on the banks of River Coleroon, (known also as north Cauvery) about 20 kms form Tiruchi. Ayyan Vaikal is the river passing through Lalgudi. The temple here has won a unique place among the temples of Tamilnadu. The temple was taken up for being extended by the parantaka kings. This is an ancient temple about 500-1000 years old. The old name of lalgudi was Thiruthavathurai (The divine place of penance). It was ruled by Malik Gafoor, a slave who became a head general in the army of Alauddin Khilji, ruler of the Delhi sultanate from 1296 to 1316 AD. The ancient Sabdarishiswarar temple is in Lalgudi. During his invasion on Tamilnadu, Malik Gafoor, while passing through this region saw the workers painting the tower in red. He asked his commander in Urudu, “What is this Lal gudi?” His question became the name of the place then as Lalgudi.

The Saptharisheeswarar temple, dating back to the seventh century, is a marvellous example of the devotion of Pallava, Chola, Pandya and Nayak kings to the art and craft of building temples. Saint-composer Tyagaraja had offered homage to the Lord by composing the Lalgudi Pancharathna kritis in ragas Bhairavi, Todi, Kalyani, Kambhoji and Madhyamavathi. These songs, along with the 112 Pillai Tamil hymns composed by Meenakshisundaram Pillai and the hymn of Arunagiri Nathar are inscribed on the walls of the Amman (Perunthiru Piratii) temple. The sanctum sanctorum of the Saptharisheeswarar temple is facing west and the Amman shrine the east. The five-tier majestic Rajagopuram with beautiful sculptures welcomes the devotees. As one enters the temple via the Thiruvathirai mandapam, one can see the 12 rasis engraved on the ceiling. Separate shrines for Mahalakshmi and Saraswathi in the Maha Mandapam are special features. Close-by are the idols of Athri, Brigu, Pulasthiyar, Vasishtar, Gowthamar, Angeerasar and Marichi offering worship to the Lord. Thirunavakkarasar and Thirugnana Sambandar both refer to the greatness of the Thiruthavathurai temple in their hymns. There are over 120 inscriptions, Pallava, Chola and Pandya. The Pallava king Nandi Potharayan had made a donation for the temple for lighting lamps and conduct of festivals. King Rajakesari Varman in his inscriptions prescribes punishment for those who do not perform the task of lighting lamps assigned to them.The Ardhanareeswara, Bikshandar and Veenadhara Dakshinamurthi granite idols in the koshtas of the sanctum sanctorum are the finest pieces of Chola sculpture. A unique feature of the Navagrahas in the temple is that they all are facing the Sun God. A very rare Siva sculpture with Kattuvanga and one of Chamundi have been found by the scholars of the Dr. Rajamanickanar Center for Historical Studies. In all the ancient scriptures and records the place is known as Thiruthavathurai. However during the invasion of Malik Kafur down south the troops were wonderstruck by the red tint at the top of the temple tower and called the place Lalgudi (red town) and the place came to be known by that name. The Swayambu Siva Lingam in the sanctum sanctorum is also seen with a red tinge

The Saptharisheeswarar temple car is the third tallest in the state after the Tiruvarur and Tiruvidaimarudhur temples in Thanjavur district. The temple car, however, had its last run in 1936. Thanks to the painstaking efforts of the temple authorities the car with brilliant and intricately carved wooden panels are preserved under a tin roof. One of the panels portrays an aerial view of the Saptharisheeswarar temple with the seven sages offering homage to the Lord from above. The devotees wish that if the car festival cannot be celebrated for logistic reasons at least during the Chitirai festival, temple car should be kept open and prayers offered to the deities placed in the temple car.

The Devas (those belonging to the celestial world) appealed to Lord Shiva to protect them from the harassment of demon Tharakasura. Lord shiva created Lord Muruga from the six sparks from His face. Lord Shiva wanted to play with the seven rishis – Athri, Brugu, Pulasthya Vasishta, Gautama, Angirasa and Marichi – left the child in their hermitage. The wives of the rishis were happy to see the child. When the child began to cry they played with him. When the child began to cry loudly due to hunger, the rishi patnis failed to feed the child, the Kruthika maidens came in and took care of the child. When the rishis returned to the ashram after their daily yagnas, they came to know that their wives failed to feed the child and felt sad that they had lost the opportunity of a blissful life due to the attitude of their wives. The angry rishis drove away their wives. Lord Muruga understood the cause of His birth. He killed Tharakasura. While returning back, He cursed the rishis. They trembled. As they could not get a relief in Tiruvaiyaru where they undertook intense penance they came to Lalgudi and continued the penance. Lord Shiva appeared before them, blessed them, cracked His head a flame (jwala) from His head and absorbed them in Himself and thus relieved them of the curse. As all the rishis had been taken into Shiva, the Lord came to be known as Sabdarishiswarar. This caused cracks on the Head of the Lord and the marks are visible even today. The sculptures of the Seven Rishis are at the entrance of the temple. Since Planet Sun was the son of Marichi, Moon the son of sage Athri, Mercuru is the son of moon, Jupiter the son of sage Angiras, Mars belonged to family of Vasishta and Sani was the son of Sun God. So when a devotee prays in this temple all the problems due to these nine plants vanish.

Arudhra is the most important festival in the temple. Nine days prior to the Arudra Darshan day, music, discourses and mythological plays are staged at the special mantapam that attracts devotees. On the day prior to the Arudra festival idols of the Lord and Amman are decorated in the special Thiruvavaduturai mandapam and taken out in a procession. Chitra Pournami, Adipooram, Navarathri, Skanda Sashti, Thai poosam, Vasanthotsavam, etc. are celebrated in the temple with traditional fervour. Special mention may be made of the Saptha-Sthana festival in the month of Panguni (March-April) when the Lord in procession visits the important temples in Idayathamangalam, Manthurai, Angarai, Anbil Thurai, Manakkal, Mayilrangam and Sathyamangalam. Kumbabishekam was performed in 1952 and 1993.

Devotees pay their gratitude by performing abishek and offering vastras-clothes- to Lord and Mother.

Lord Shiva is a Swayambu in the temple with crack lines on the head.

Those facing problems in marriage efforts, child boon and progress in education are advised to pray to Lord Sabdarishiswarar. The seven rishis – Atri, Brihu, Pulsithar, Vasishtar, Gauthamar, Angeerasar and Marichi – prayed to the presiding deity Saptharisheeswarar to ward off the bad period they were passing through due to the curse by Lord Murugar. It also believed that Lord Vishnu got his Chakrayudha after worshipping the linga here. Worshipped by Vishnu, Lakshmi, Murugar, Bairavi and Sage Parasar. Malava king got his leprosy disease cured here. This Temple was believed to have been built by Paranthaka kings. It is also believed that Sambandar, the Shaivite saint sang a poem anout this temple but it has been lost. The great Saint Thyagaraja has composed five great Krithis when he visited Lalgudi and stayed with his disciples. Three of these songs are about the Goddess and two about the God.

The nearest airport is the Tiruchirapalli International Airport, at a distance of 28.2 km in 42mins.

The nearest railway station is lalgudi Railway Station, which is.1.5 km from Saptharisheeswarar temple 5-minute trip to the temple.

Saptharisheeswarar temple can be reached by road from Trichy, samayapuram, TNSTC operates buses on a daily basis from these two places.