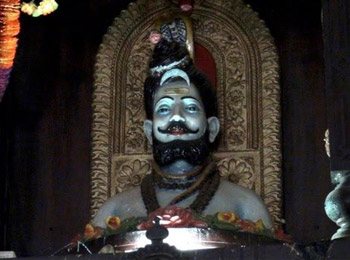 The Saptakoteshwar temple at Narve, Goa, India is considered to be one of the six great sites of temples of Lord Shiva in the Konkan area. 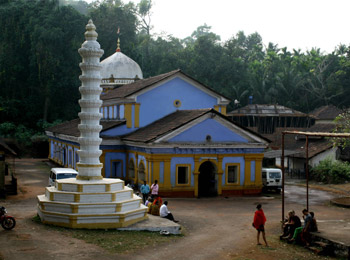 Saptakoteshwar, a form of Shiva, was one of the chief deities of the Kings of the Kadamba dynasty around the twelfth century. The temple was built by the King for his wife Kamaldevi who was a staunch devotee of this god. The Kadamba kings proudly used the title (Birudu) Shree Saptakotisha Ladbha Varaveera. The gold coins discovered at Chandor, Goa (old name: Chandraura, Chandrapura), Gopikapatna and other places of the kings Jayakeshi I, Jayakeshi II, Jayakeshi III, Shivachitta Paramadideva, Soideva, etc., have inscriptions reading: “Saptakotishvaralabdha – Varaprasada,” which means "with the grace of Lord Saptakotishwara", the family deity of Kadambas. These coins were often referred to as Saptakotisha-Gadyanakas. In 1352, when the Kadamba kingdom was conquered by the Bahmani Sultan Allauddin Hasan Gangu, Goa came under the rule of the Sultan for about 14 years. A number of temples were destroyed during this period and the linga (symbol of Lord Shiva) at the Saptakoteshwar temple was dug up by the troops. In 1367, the army of Vijayanagar King Harihararaya defeated the Bahmani Sultan's troops in Goa and managed to restore most of the temples to their former glory including that of Saptakoteshwar. According to the records the temple was reconstructed by Madhava Mantri by the end of the 14th century. When the temple was demolished in 1560 by the Portuguese (and a chapel dedicated to Nossa Senhora De Candelaria was erected in its place), the linga was used as a well shaft until some Hindus managed to rescue it. The idol was then smuggled across the river to Bicholim where it was installed in a brand new temple and revamped in 1668 by the Maratha Chatrapati Shivaji Maharaj. The construction of the new site was carried out by Shri Shivaram Desai (president of the sansthan) on Chatrapati Shivaji Maharaj's blessings & guidance. 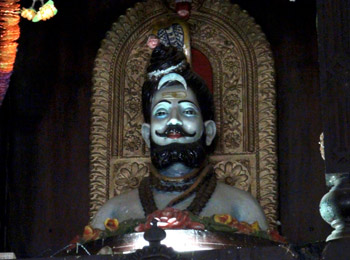 In front of the temple towards the right side of the Deepastamba is a shrine of Kalbhairav and outside it are seen the padukas of Dattatraya carved on the stone. A little ahead of the Deepastamba is seen two huge laterite pillar-like structures buried deep. They may be stone hinges. Behind the temple are carved stone walls with niches. It may have been an ancient Agrashala. Similarly, close to the temple there is a man-made tunnel like structure which is presently silted. Near the temple site there is a sacred tank known as Panchaganga Tirtha which is used for ablutions by the devotees during the birth day of Lord Shiva. 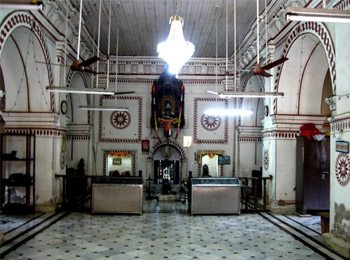 Legend has it that Shiva appeared at this place to grant the wishes of seven holy sages who prayed for seven crore years. This incarnation of the Lord is known as Saptakoteshwar (sapt means seven and koteshwar means lord of crores).

The most important festival celebrated at the temple, attended by thousands of devotees from Goa and other parts of India, is Gokulashtami which is considered to be the day on which Lord Shiva appeared in this incarnation to grant the wishes of the seven holy sages. Krishna Janmashtami is celebrated on a grand scale in this temple. Taking bath on this occasion in the river near the shrine is considered meritorius. The belief is that the river becomes Pancha Ganga on the Gokulashtami day. Even in the 16th century large crowd of devotees estimated to be over thirty thousand would assemble and bathe in the sacred waters. During the celebration, in the morning, men from the different wards go towards the river carrying the murthis (idols) of various Gods and Goddesses in palkis – a flat wooden plank with a covering on top and protruding poles on either side. The palki is usually decorated with fine wooden carvings. On reaching the river the devotees bathe themselves with water as part of the moral cleansing ritual. Ashtami is celebrated on the third day of Shravan and often coincides with the popular Masandevi Zatra.

The village of Narve is located about 35 km from Panaji and can be reached by taking a ferryboat from the island of Divar.