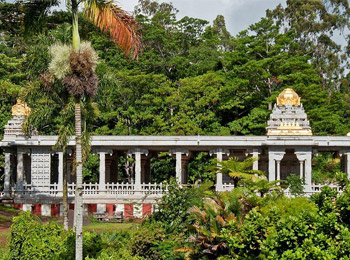 Only in case of Sanmarga Shiva Iraivan Temple in Kauai Island at Hawaii (USA), a wholly and solely stone structure, with pillars/sculptures/vimana (uppermost storey) made of good old granite from India has been attempted. It is just like the temples the Chola kings of South India created thousands of years ago. The temple is dedicated to Lord Shiva. The word "Iraivan" means "He who is worshipped," and is one of the oldest words for God in Tamil. The temple is located next to the Wailua River and 8 km from Mount Waialeale. It is the first all-stone temple to be built in USA. It is maintained by the Shaiva Siddhanta Church. 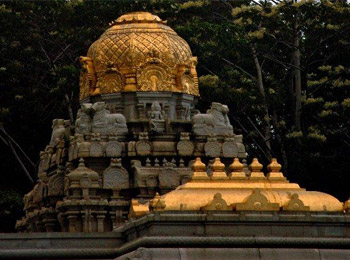 The shrine possesses a number of rare architectural features. The first one is that it being carved entirely by hand. The second is the 4-foot-thick (1.2 m) foundation made of a crack-free, 7000-psi formula using fly ash. The third set of features is exhibitions of the stone carver's craft.

The temple is facing southward and built according to Vastu science. Pillars through the temple are spaced and structured to serve as energy points. The main idol is a rare spatikha Shiva lingam, a pointed, six-faced 700-pound, and clear quartz crystal. The stone, estimated to be 50 million years old, was not cut out of rock but was found in a perfect state encased in mud. It was probably harvested from its original outcropping by an earthquake.

The quartz crystal of the Shiva lingam is considered especially sacred because it represents the element akasha (sky).

This Temple was inspired by a vision of Sivaya Subramaniya Swami in which he saw Lord Shiva walking on the land where the temple is now situated. It is a place of pilgrimage for Hindus worldwide. Subramaniya Swami set three parameters for its design and construction. They are: it follows traditional design according to the Saiva Agamas, it be designed to last 1,000 years, it be entirely carved by hand, without the use of any machinery.

The temple design was done by V. Ganapati Sthapati. Carving of 3,000-plus blocks of granite commenced in 1990, at a worksite in Bangalore in India. Beginning 2001, the stones were shipped to Kauai and assembly begun by a team of shilpi temple carvers under the direction of a master architect. The temple is expected to be completed in a few years.

The nearest airport is Honolulu.

A system of state highways encircles each main island. Each major island has a public bus system.