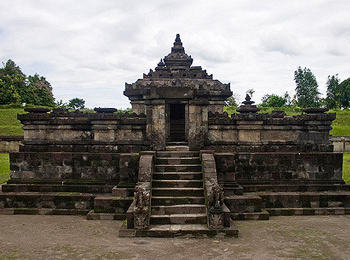 The temple of Sambisari is located in Sambisari Settlement, Purwomartani Village, Kalasan Sub-district, District of Sleman, Yogyakarta Special Region. The shrine is about 15 kilometers away from the town of Yogyakarta in the north east direction. This temple is dedicated to Lord Shiva.

The Sambisari Siva Temple stands about 6.5 meter below the ground, hence unseen from a distance. It is believed that in the earlier days the ground surrounding the temple used to be on the same level as that of the temple. The sand and rock from Mount Merapi however, submerged the whole area, including the shrine. As a result, Sambisari Siva Temple is lower that it’s surrounding area. The area surrounding the shrine has been cleared, because of which the temple is visible in an open square, with a flight of steps on each of the four corners.

The Sambisari Temple compound is enclosed by double enclosures. The outer courtyard is 50 x 48 meters square bounded by low stone walls, while the inner courtyard is surrounded by two-meter-tall stone walls, 50 centimeters in width. On each side of the walls, there is an entry without a doorway or any ornamentation. Sambisari Shrine contains one main shrine and three additional shrines which are located opposite the chief one. The main temple facing west, remains undamaged while of the three sub temples, only the platforms remain visible till date. Each of the sub temples is 4.8 square meters.

The chief place of worship is 7.5 meters tall. The shrine sits on a 13.65 square meter podium, two meters in height. The shrine body is five square meters, and the rest of the podium space makes a pathway around the temple body. The pathway is enclosed within 1.2-meter-tall walls. With only its roof seen rising high upwards from outside while the body is concealed by pathway walls, the shrine looks rounder.

The temple base is plain without any decoration. However, the outer side of the walkway walls is decorated with a row of wonderfully inscribed depictions of flowers and twining plants.

The staircase leading to the pathway is located in front of the door, in the west. The staircase has sides decorated with a couple of dragon heads, their mouths are wide open. The stone below the each head is engraved with an image of a squatting Gana, both hands raised up as if they held the dragon head from falling. Gana, also called Shivaduta, is a small creature escorting Shiva. Pictures of Gana are also found at the entrance into bigger temples at Prambanan.

At the upper end of the staircase, there is a Paduraksa gate decorated with sculptures of patterned stone tiles on its frame. The base of gate frame is decorated with dragon heads looking outside, and their mouths are wide open. The same decorating designs are also found at the entrance into the cella, with an addition of a Kalamakara head without a lower jaw sculptured on the door frame.

The Shiva inside the niche is pictured as a two-handed man sporting a beard and standing on a lotus. To his right is a trident, his main weaponry. The statue is similar to the one found at the south niche of Shiva Temple, Prambanan Temples compound, only slimmer.

The Ganesha statue in the east niche is almost similar to the one found in the east niche of Shiva Temple. The Ganesha is also sitting on a lotus-shaped throne (Padmasana), both knees are wide apart and both feet meet. However, while the right hand is on the knee facing upwards, the left hand is holding a bowl and the tip of the trunk is dipped into the bowl, sucking something from it.

Inside the north niche, there is a statue of Durga Mahisasuramardini, Durga the goddess of death. As pictured in Shiva Temple in Prambanan, Durga is also portrayed as a eight-handed goddess standing on Nandi the cow. One of Durga’s right hands is propping against a bludgeon while the other three right hands are gripping an arrow, a sword and a spiky disk, respectively. One of Durga’s left hands is touching the head of Asura, and the other three left hands are holding a bow, a shield and a flower, respectively. However, unlike the one in Shiva Temple, the Asura, the dwarf giant escorting Durga, is pictured in a squatting position. Durga in Sambisari Temple is also more sensual judging from the way Durga is standing, the fact that the fabric covering her hip is revealing her thighs, her bosoms are bigger and the smile she is smiling.

Sambisari is a Hindu-Shiva temple built in the beginning of 9th century. Experts believe that Sambisari Temple was built by Rakai Garung, a Mataram Hindu king of Syailendra Dinasty. Sambisari Temple was discovered by chance when a farmer working in his paddy field accidentally hit a solid object in the ground with his hoe. Being curious, he dug and had a closer look at the object. He soon realized that it was a carved stone. Following up the discovery, Yogyakarta Archeological Office conducted necessary examination and excavation. In 1966, based on the report, experts concluded that a temple was concealed at the site, under the sand and rock sent by Mount Merapi when it erupted in 1906. The excavation, reconstruction and restoration of the temple finished in 1987.

How to Reach Sambisari Temple

The temple is located about 8 km east of Yogyakartanear Adisucipto International Airport.

You can take the bus route Yogya-Solo from Janti and stop at Yogya-Solo Street Km 10 (pay attention to the road sign). From there, you can continue by ojek (motorcycle cab) for about 2 Km.

Head to the east route to Solo. At Yogya-Solo Street Km 10, find the road sign showing direction to Sambisari temple and turn left. Keep going straight for about 2 Km.