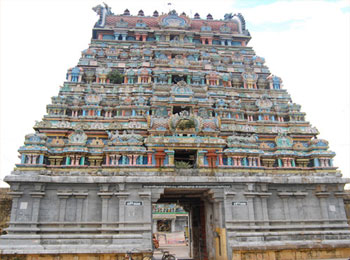 Tirumeeyachur Ilamkovil Sakalabhuvaneswarar Temple a Hindu temple situated at Thirumeeyachur in Tiruvarur, the directing god is Shiva. He is called as Sakalabhuvaneswarar. His consort is known as Mekalambika. Tirumeeyachur is one kilometre from Peralam near Mayiladuthurai. Bus facility is available to Peralam from Mayiladurai.Saint Tirunavukkarasar has praised the temple in his Thevaram. Adored with golden Kondrai flowers and garland the new moon glittering on the long hair Accompanied by radiant Mother Mekalambika My Lord will not leave Meeyachur temple. This is the 57th temple praised in Thevaram songs on the southern bank of Cauveri. Festival is Rathasapthami in the Month of Thai is an important festival in the temple. This festival signs the turning of Sun’s Ratha (car) marking the beginning of Utharayana period from the month of Thai (January-February) towards North from the South. Utharayana covers six months beginning from Thai to Aani month (June-July). All festivals related to Lord Shiva and Mother Ambika are celebrated in the temple in a grand manner.

The District of Tiruvarur has been carved out as a separate district due to trifurcation of Thanjavur District (of 1981 census). According to this division, seven taluks namely, Kudavasal, Thiruvarur, Nannilam, Needamangalam, Mannargudi, Thirutturaippundi and Valangaiman were detached from the Thanjavur district to form this new district. At present also this district is comprised of seven taluks and ten Community Development Blocks. Thanjavur attained prominence under the Chola rulers who were paramount in South India during the 9th to 12th centuries. They were excellent rulers and mighty builders. Many examples are found in the district which bears testimony to this. Many of these temples reflect the genius and architectural proficiency in sculpture, painting and wood-carving. The administration of Thanjavur (Tiruvarur) was given over to English fully under the Treaty of 1799. The ruler of Thanjavur was allowed to retain the fort of Thanjavur with very limited powers. When the ruler died in 1841, without heir, the Thanjavur fort was also annexed by the British. Thanjavur remained under the British rule until 1947 when India attained freedom. 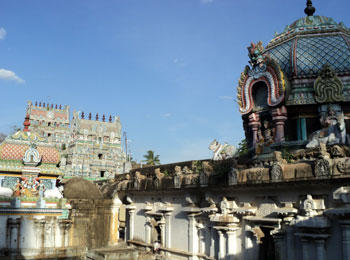 Lord Shiva (Sakalabhuvaneswarar) is a swayambumurthy. Mother Lalithambika is seated on the Srichakra throne with Her Abhaya, Varada hastha Mudras, placing her right leg on the left majestically. Ambika is very powerful. The main tower-Rajagopuram has five tiers and the second 3 tiers. There are two corridors – prakaras. The Lalithambika shrine is on the right at the entrance. Ratha Vinayaka is in the main hall while Nagar, Sekkizhar, the Lingas worshipped by Sapthamadhas and Lingas worshipped by Agni, Yama and Indira are in the inner corridor-prakara. Lord Sakalabhuvaneswarar graces in the form of Swaymbu Linga. Those chanting the Lalitha Sahasranama (1000 names of Mother Lalithambika) and Lalitha Navaratnamala is gifted with the grace of the Mother. This is the place where Garuda (the eagle vehicle of Lord Vishnu), Aruna the charioteer of Sun, the monkey brothers Vali and Sukriva, Yama the God of Death, Saturn planet were born. Devotees perform Ayush Homa and Mrutynjay Homa and offer rice made with Pirandai placed on lotus leaf to Lord as an offering (nivedhana) Shiva for longevity and to conquer Yama. This is the place where Sun worshipped for relief from a curse that made him dark in colour and got back His golden appearance. Mother Kali also worshipped here. Many of us know that Aruna is the charioteer of Sun. His story lies in Tirumeeyachur. Sage Kashyapa had two wives, Vinatha and Karthru. Both prayed to Lord Shiva for a child. Shiva gave two eggs to them. Of Vinatha’s egg, Garuda was born. As nothing came out of the egg of Karthru, in haste, she broke the egg and found a deformed child. She begged to Lord Shiva for her hasty act. Lord was all merciful and told her that the child would be charioteer of Sun’s ratha drawn by 7 while horses and the dawn of the day would be called Arunodaya after his name Aruna. Aruna was a staunch Shiva devotee and performed penance to have His darshan. Sun mocked at him saying that how a person with deformities can perform penance. Yet Aruna did not lose heart and continued the penance. While gracing Aruna, Lord Shiva cursed Sun for ridiculing Aruna. Sun lost his radiance and made amends by worshipping Shiva and Mother placing them on an elephant. Representing this story, the sanctum sanctorum of the temple is in the Gajabrushta (back side of an elephant) form. Shiva graces in the name of Meganatha here. There are three Kalasas (pots) on the Vimana. As Sun regained his radiance, the place is known as Meeyachur. Pirandai rice nivedhana some type of conches are born in the sea once in 100 years having the power to ensure longevity. Lord Yama gathered 1008 such conches and performed abishek to Lord Shiva. Yama is the authority for Sadaya star. He prepared rice nivedhana (offering food to God) with a creeper called Pirandai to Lord Meganatha. The devotees can enjoy the darshan of Brahmma, Lingodhbhava (Shiva) and Vishnu standing in between the two towers. Lord Chandikeswara appears with four faces. Kshetrapuraneswarar idol is beautifully sculpted. Mother looks angry if viewed from the right and graceful if viewed from the left.

The main Deity is Soundaryanayaki. Mother Sri Lalithambika, also praised as Soundaryanayaki graces from the Srichakra throne. Folding the right leg and placing it on the hanging left, Sri Lalithambika appears majestically with all powers. Ambika with right leg placed on the left, is a rare form. There are two Shivalingas in the temple, one below the main tower-Rajagopuram-sung by Saint Ganasambandar and the other in Ilangoil sung by Saint Tirunavukkarasar. Sri Ambika has more prominence in this temple. 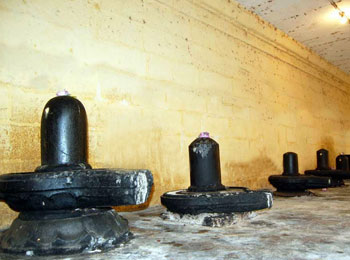 Demon Pandasura was harassing the Devas in the celestial world. They prayed to Mother Parasakthi to protect them from the Demon. Goddess appeared from the Yagna fire with Her Srichakra Chariot with the name Lalithambika. She was too furious after killing the demon. Lord Shiva advised Devi to go to Earth as Sripuravasini and perform penance to quell Her fury. Mother Lalithambika came to this place, performed penance and became calm and graceful. She created Vachinya and other angels of words and asked them to chant her 1000 names. This is how Sri Lalitha Sahasranamam with the beginning "Sri Mathre" came into being. Lord Shiva is a Swayambulingmurthy. The rays of Sun fall on the Lord from 21 to 27 in the month of Chithirai when special pujas are performed in the temple. The sculpture of Sri Kshetrapuraneswarar is the attraction in the temple. Mother Goddess appears both furious and graceful when viewed from different angles.


Rathasapthami in the Month of Thai is an important festival in the temple. This festival signs the turning of Sun’s Ratha (car) marking the beginning of Utharayana period from the month of Thai (January-February) towards North from the South. Utharayana covers six months beginning from Thai to Aani month (June-July). All festivals related to Lord Shiva and Mother Ambika are celebrated in the temple in a grand manner.


Virgins seek the blessings of Lord Kalyana Sundareswara with garlands and archanas for early happy marriage. The sick offer Pirandai rice on the lotus leaf for cure. Devotees pray to Mother Lalithambika for child boon, removal of obstacles in marriage alliances, for gaining progress in education. Blessed with a response to their prayers, devotees offer abhishek and vastras to Lord and Mother. They also offer anklets to Mother Lalithambika.


The closest airport is in Trichy.


The closest railway station is in Mayiladuthurai