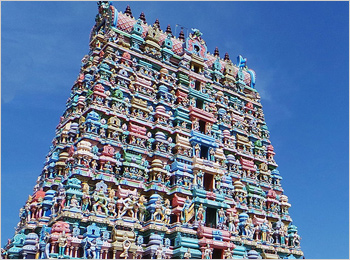 The Tirunelveli Sthalapurana explains the origin of the name Tirunelveli. The Puranic version says that one Vedasarma, a staunch devotee of Shiva, on his pilgrimage from the North to the South was invited by Lord Shiva in his dream to his abode on the banks of the sacred river Tamiraparani. The delighted devotee came to 'Sindupoondhurai on the banks of the river and stayed there with his family. Once there was a famine which forced Vedasarma to collect paddy by way of begging and continuing his daily prayers. One day he spread out the paddy to dry under the Sun before the Lord, and went for his ablutions in Tamiraparani. He prayed to the Lord for rain which he thought could be a remedy for the famine. His prayer was answered and when he was bathing, a thunder storm broke-out and it rained heavily. Vedasarma rushed to the place where he had spread the paddy. He witnessed a miracle. Despite rain around the area, the paddy that he had spread did not get even a single drop of rain and did not get soaked. Since then according to the purana the Town is called as “Tiru-nel-veli” (Sacred hedged paddy). 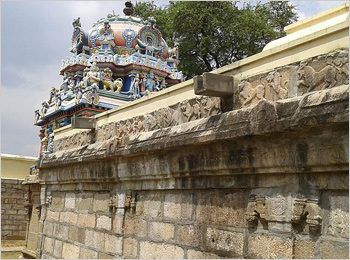 The Nava Tirupathis in the Pandya region enjoy equal reputation as the Nava Tirupathis in the Chola region. As Lord Himself performs the functions of the Navagrahas (nine planets), there are no separate shrines for the planets in these temples. Devotees facing adverse effects of planets are advised to visit these Tirupathis and worship the Lord for relief. It would be very difficult to visit these temples travelling by bus, hence a cab could be hired so that all the temples could be covered in a single day. Those in Chennai can use the services of The Tamilnadu Tourism Development Corporation that runs two services in a month in the first and third Fridays. They can return by Wednesday next. All these nine Vaishnava temples are related to nine planets. Lord Vishnu Himself directly functions for the devotees for the Navagragas.

These nine temples are as follows representing the respective planets. 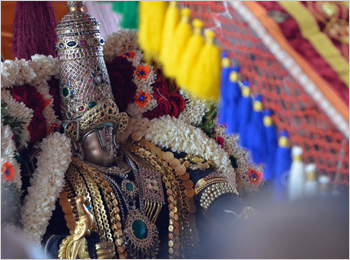 When Rishi Suprabar dug the ground here for a yagna he was performing, he found a bow and a measuring scale, which turned into a handsome young man and a beautiful girl thus relieving them from Kubera’s curse. Nam Azhvaar saw and attained Lord Devapiraan of Erettai Tirupathi as both his father and mother in thought, word and deed. 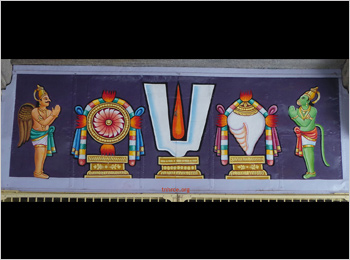 The first of the two temples, here enshrines Srinivasan (Devapiran) in a standing posture facing east. This temple has two prakarams. The second temple with 2 prakarams enshrines Aravindalochanan in a seated posture facing east and his consort is Karuntadankanni Naachiyaar. These temples underwent renovation in 1998.Legend has it that a man and a woman who had been cursed by Kuberan to assume the forms of a measuring scale (Tulai) and a bow (Vill), were relieved of their curse by a sage Atreya Suprabha here, hence the name Tulaivillimangalam. Legend also has it that Indra, Vayu and Varuna worshipped Vishnu here. The senthaamaraikkannan - Aravindalochanan temple has a different set of legends related to the Ashwini twins worshipping Vishnu here with red lotus flowers. 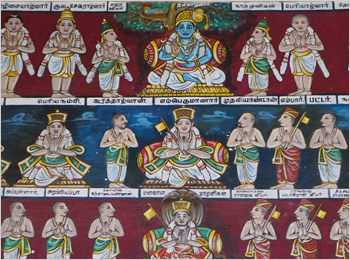 The Garuda Sevai utsavam(festival) in the month of Vaikasi(May-Jun) witnesses 9 Garudasevai, a spectacular event in which festival image idols from the Nava Tirupathis shrines in the area are brought on Garuda vahana(sacred vehicle). An idol of Nammalvar is also brought here on a Anna Vahanam(palaquin) and his paasurams(verses) dedicated to each of these 9 temples are recited. The utsavar(festival deity) of Nammalvar is taken in a palanquin to each of the 9 temples, through the paddy fields in the area. The paasurams(poems) dedicated to each of the 9 Divyadesams are chanted in the respective shrines. This is the most important of the festivals in this area, and it draws thousands of visitors.

Devotees pray to Lord for removal of obstacles in marriage alliance talks and for progress in education and for child boon.It is advised that devotees go to the temple after ascertaining the time of the presence of the priest of the temple. This is attributed to Shadow Planets (Chaya Grahas) Rahu and Ketu.

Brahmanda Purana one of the eighteen sacred texts of Hinduism and written by Veda Vyasa contains a chapter called Navathirupathi Mahatmeeyam that describes all the nine temples of Navatirupathi. The Devapiran temple is revered in Nalayira Divya Prabandham, the 7th–9th century Vaishnava canon, by Nammazhwar. The temple is classified as a Divyadesam, one of the 108 Vishnu temples that are mentioned in the book. The temple is also classified as a Navatirupathi, the nine temples revered by Nammazhwar located in the banks of Tamiraparani River. Nammazhwar makes a reference about the temple in his works in Thirvaimozhi. During the 18th and 19th centuries, the temple finds mention in several works like 108 Tirupathi Anthathi by Divya Kavi Pillai Perumal Aiyangar. The temple also forms a series of Navagraha temples where each of the nine planetary deities is associated with one of the Navatirupathi temples. The temple is associated with Ketu, a snake planet. Along with the Aravindalochanar temple located 100 yards away, the temple is referred as Irattai Tirupathy (meaning twin Tirupathis).

The nearest airport to the temple is Madurai Airport which is 164 km away from the temple.

The temples are around 3 kms from Sri vaikuntam.The temple can be reached by buses plying between Tiruchendur-Tirunelveli routes. Bus services to this temple are available from Madurai, Tirunelveli, Tiruchendur and Thoothukudi through Srivaikuntam and to the temple.