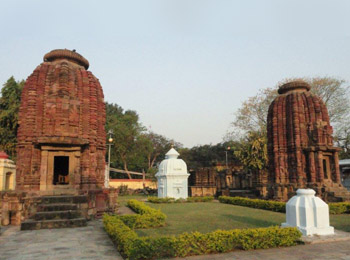 These temples are from the 9th Century AD. They have rich texture and curved surfaces that are noteworthy. Each temple stands by itself on a raised platform. Each has a cell and an attached portico. The minute recesses and angularities produce a charming effect of light and shade and confer an appearance of greater height from the continued cluster of vertical lines than they really possess. Archeological Survey of India has preserved this temple. The decorative motifs and the plastic art of three temples at Boudh are certainly superior to and older than the great lingaraj-Ananta –Vasudeva group. One particular feature of the Ramanath temple is worth particular attention. Their plan is quite different from any other temples. In plan these temples are eight-rayed stars and the argha-pattas of the lingas are also similar.

The nearest Airport is at Bhubaneswar. The nearest railway station is in Rairakhol. Boudh is well connected with road and rail with other district headquarter and the state capital Bhubaneswar.