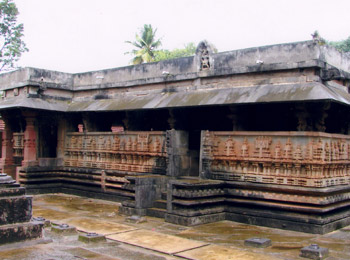 
Keladi is a temple town in Shimoga district of the state of Karnataka in India. Located about 8 KM from Sagara town. A Shiva temple of historical importance is located here. One has to take a diversion at Sorab Road. There is a museum containing old manuscripts written during the times of the Keladi dynasty. The principal building in the place is the double temple of Rameshwara and Veerabhadra, a large and plain structure built in the Hoysala-Dravida style. After the disintegration of Vijayanagar Empire in the Battle of Talikota, the Keladi Nayakas created an independent kingdom and it remained so until it was annexed to Mysore Kingdom by Hyder Ali. Shivappa Nayaka and Chennamma were the rulers of this kingdom.


The temple is popularly known as Keladi Rameshwara Temple. The shrine has three deities, Devi Parvathi, Lord Rameshwara and Lord Veerabhadra. The temple was built by Chowdappa Nayaka. The temple is in dravidian style of architecture influenced by Kadamba and Hoysala style. The roofs and pillars of the temple are made out of carved wood.


The magnificence of architecture, the skills of the craftsmen and the deliberation of the Kings who made build some of the masterpieces is worth appreciating. A concoction of all these is seen in Keladi temples built during the rule of Choudappa Nayaka, the first ruler of Keladi Dynasty. The outer look of the temple might give you an impression of a large typical Karnatic house but inside is the actual treasure.

Keladi temple is amazingly carved and sculpted temple built with a blend of in Hoysala, Dravida, Kadamba and Vijayanagaran style of architecture. The large temple complex houses three temples dedicated to Rameshwara (Lord Shiva), Veerabhadreshwara (warrior form of Lord Shiva) and Parvati Devi (consort of Lord Shiva). The central shrine is the one dedicated to Lord Shiva and so the temple is popularly known as Rameshwara Temple.

The temple is cited on an elevated platform in the centre and a tall dwajasthamban is seen just outside the Veerabhadra temple. On the top of this Dwajasthambam sits Nandi (vehicle of Lord Shiva). This dwajasthambam is said to be erected during the rule of Keladi Chennamma. You can see beautiful intricate carvings on wood on the roof and pillars of the Parvati Temple. The temple is a treasure of intricate carvings but the most captivating is the stone sculpture of Ganda Berunda on the ceiling of the Veerabhadra temple. Ganda berunda with two heads holding lions with its beak and elephants with its claws is seen in this sculpture. Even the pillars are beautifully carved with horses or lions with their fore paws rose on Yali columns.