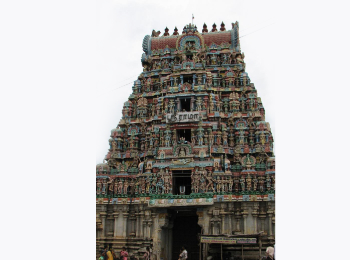 
The Thiruvangad temple or Sree Ramaswami temple is dedicated to the Hindu deity Sree Rama which is situated in the eastern part of Manjodi Illathaazha, Thalassery, in the state of Kerala. Owing to its copper sheeting rooftop, this temple is popularly known as the Brass Pagoda. In 18th century a part of the temple was wrecked by the troops of Tipu sultan but the main shrine is itself believed to have been saved from damage. During 18th century this shrine was one of the outposts of the Thalassery fort. 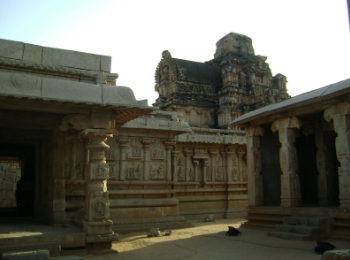 Sree Ramaswami temple is one of the five Sree Rama temples situated in Kerala. This shrine dedicated to Lord Rama is exclusive due to its historic and mythological significance. There were many meetings held amongst the native leaders and the representatives of the East India Company during which all the political treaties and agreements were signed. The temple has numerous Archaeological accounts and remarkable sculptures too. A seven day annual festival is held which begins on Vishnu Day in Medam (April to May). Apart from this temple the other four temples are at Thrinayamkudam(Vaikom), Triprayar, Thiruvilluamala and Kadalur. The temple is positioned on an raised plot with an adjacent tank known as Chira. The temple tank Chira spreads about an area of one hectare. This temple is well preserved and has outstanding wood artifacts, terra-cotta work, mural paintings on the wooden planks in the ceilings which are really a treasure of art. The temple's big tank is very useful for the devotees. The guest houses for travelers to stay during their pilgrimage and the Kalyana Mandapam are well maintained. 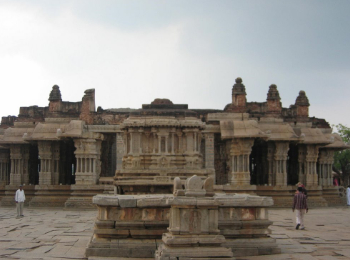 The main deity of this temple, conceived as Rama Narayana, is having four hands sculpted in Krishna Shila. The three arms are adorned with Shankha, Chakra and Mace while the fourth arm is sculpted showing the Abhaya Mudra which indicates the sign of blessing and Moksha. The Mace is shown upside down which is an rare feature. It is also believed that the deity depicted is of Poorna Roopa that is assumed by Sree Rama after destroying Khara, Thrisiras and Dooshana and their fourteen thousand soldiers single handedly. The idol existing in the temple is of nearly 6feet tall and the Altar is facing towards East direction. Sree Hanumans Idol is seen in the front towards left of the idol of Sree Rama. All the devotees coming to worship here give equal respect and importance to Sree Hanuman's vigraha which is made up of Metal. Apart from Sree Rama and Sree Hanuman the other divinities in the temple are Sree Porkali in the 'Namaskara mandapam' and Sree Subramanyan who is seen facing west near Thidappally. Apart from these deities are Sree Dakshinamoorty and Sree Ganapathy also facing South, in the southern nada. Sree vanasastavu is in the 'Pichakathara where Sree Guruvayurappan is established on the north side facing east and many other Thevara moorthies that are also present facing west. There is a belief about the deities and the idols including the recent additions of Vanu Sastavu, Guruvayoorappan and Thevara Moorthis is that some of the minor deities have been relocated from the nearby temples just to ensure their safety from Tipu Sultan's violation. There are many unique sculptures and paintings that can be found in treasure house. The main features of the temple are the unique architecture just like the Srikoil which is in a rectangular shape and is of two floors with copper roofing. While the Temple’s front portion is vertical, the rear and the sides are inclined. The temple also includes three gold plated Stupis which are placed on the top where the roof meets. All the walls surrounding the temple are adorned with the imageries of Gods and many Puranic figures. 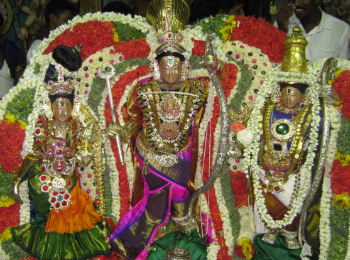 The origin of this temple is enigmatic because there are no annals available that can tell us the age of the temple excluding few mentions in Keralolpathi and Malabar Manual. According to Kerala Mahatmyam this temple was consecrated by God Parashurama, one of the incarnations of Lord Vishnu. Nevertheless few of the evidence point out that this temple is approximately 2000 years old, According to a fable this shrine was sanctified by a sage named as Swetharshi. The legend also says Agasthya Muni on his way to the river for washing himself was confronted by two demons named Neela and Swetha, Agasthya cursed them. When these asuras repented and wanted a solution to save themselves from this curse, Agasthya muni directed them to perform Tapas at two Shiva temples. The place where the asura Neela performed Tapas was known as Neeleswaram and the place where Swetha performed his Tapas was known as Thiruvangad which means the sacred dense forest. After performing Tapas these two demons came to be known as Neelarshi and Swetharshi. It is also believed that Swetharishi sanctified a Shiva temple and Vishnu temple where he was performing Tapas. The deity Shiva established by Swetharshi was very aggressive. To calm its fury another Shiva was established right opposite. Now the temple consists of two Shiva shrines facing each other on the north side. Also facing towards south is the Big Sri Rama temple. Another account of the temple mentions that said that Shiva's temple was established by Neelarshi a Shiva bhakt and Sree Rama's temple was established by Swetharhsi who was a Vishnu Bhakt.


The main annual festival (Vishu Mahotsavam) begins on the day of Meta Samkramam (last day of Malayalam month of Meenam) with the traditional flag-hoisting. The festival lasts for eight days. During the festival days, every evening, a ceremonial idol of Sri Rama (Perumaal) is taken on elephant back in a procession (“Ezhunnallethu”) around the temple in royal regalia and grandeur along with flag-bearers, festooned silk umbrellas, and infantry soldiers with bows, arrows, swords and shields to the accompaniment of Panchavadyam and Pandimelam. After the ezhunnallethu, the idol is kept in the Kazhakappura in the northeast part of the chuttambalam, where on the last two days of the festival, a special ceremony called “Mothiram-Vechu-Thozhal” takes place. This involves devotees placing a gold ring on a part of banana leaf in front of the idol and praying for favors. This is indicative of Hanuman presenting Seetha’s “Anguleeyam” to Sri Rama. Performing this pooja is said to be very auspicious. On the sixth night of the festival, Pallivetta (ceremonial royal hunt) is held at Perumporkkalam (Perumkalam) to the east of the temple. This is indeed the place where Tipu Sultan had camped while attacking the temple. Aaratt (ritual immersion of the idol of the deity) is held at the temple tank. Chaakyaar- Kooth is held daily. Kathakali and Ottamthullal are also staged during the festival. Initially the yearly festival lasted fourteen days. Subsequent to this, Aaraatt was held in the sea. It was relocated to the temple tank after one of the four Ooralars named Ponol Moosad transferred his ownership rights to the East India Company. “Pattathanam” is another important celebration on Thiruvonam day in the month of Makaram. This is believed to be the day when the deity was consecrated.


The principal offerings (Vazhipatu) include Kalabham-chaarthal, Nira-maala and Valiya-vattala-paayasam. Kalabham-chaarthal is very popular and is done for fulfillment of desires and prosperity. Aval-nivedyam for Hanuman is also popular. Other routine offerings like Archana, Trimadhuram etc are also performed.