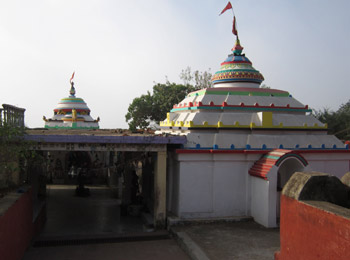 The temple of Goddess 'Ramachandi, a treat to the eyes,' is located on the banks of the Kusabhadra River in Bhubaneshwar, Odisha. The Temple is located just 5 kms from the famous Puri Jagannatha Temple. The temple is certainly more ancient that the Sun Temple at Konark. A graceful Chandi, seated on a lotus in a small temple half hidden by sand mounds, on the river mouth of 'Kushabhadra', the endless Bay of Bengal stretched to eternity, and a thick growth of Casuarina plantation around are a visual treat. 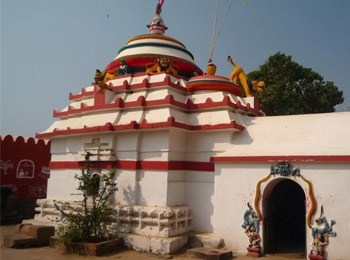 The Ramachandi temple is a small deula. It consists of two structures, namely, the vimana and jagamohana. In front of the jagamohana there is an open flat roof mandapa, which is recently built . This temple is built in sand stones, laterite and bricks.

The vimana is a pancharatha pidha deula and its height is about 30 feet from the surface of the temple complex. The structure of the vimana is erected on a 1 foot high platform. The vimana has four parts, namely the pistha, bada, gandi and mastaka. The pista of the vimana is decorated with three horizontal moldings which are joined by vertical bonds.The bada of the vimana is panchanga and therefore has a five-fold division. such as pabhaga, talajangha, bandhana, upper jangha and baranda. All components of the bada are without any decorations. The four-armed Devi image is installed on the plain pedestal. She is shown as seated in padmasana posture. She has lotus in right upper hand, rosary in right lower hand. Her left lower hand lies on the thigh while the attribute of the left upper hand is not being clearly visible. The parsvadevata of the eastern side is an eight-handed image of Biranchi-Narayana.. He has been installed on the decorated pedestal. The image has three heads (one female, one Varaha and another a male head). It stands in alidha pose on a chariot drawn by seven spirited pigs. Out of the eight arms, five are completely broken and other three hands display bow, club and mudgal.

The jagamohana or mukhasala of the temple has a vaulted roof. It is about 12 feet in height. The outer walls are completely plain. Both structures of the vimana and jagamohana are plastered with lime mortar. There is a lion on the octagonal pillar of 2½ feet high and it is noticed in the floor of the jagamohana. The niches of the northern wall contain two images of Varaha and Trivikrama. In the north west corner of the temple complex is occupied by a Siva temple named Ramesvara. 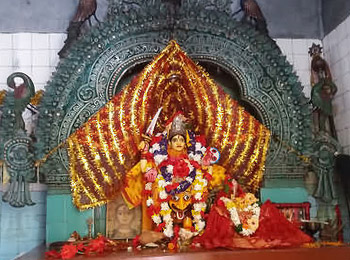 Goddess Ramachandi, the deity of Konark is thought by some to be the presiding deity of this temple.

Devotees in this temple seek fame, freedom from diseases, wealth, courage and relief from bondage.

How to get there or Accessibility :

The adjacent airport is at Bhubaneswar, which is about 64 km away.

The railway stations nearest to Konark are located in the twin cities of Puri and Bhubaneswar.

The National and State Highways link Konark with Puri and Bhubaneswar forming a virtual triangle popularly known as Golden Triangle of East. To reach Konark from Bhubaneswar, after traveling 20km take a left turn once you reach Pipli village. The road straight ahead leads to Puri.

The city of Konark experiences a climate milder than that of most of the cities in Orissa, being in the vicinity of the sea. While the temperature is very high in summer, it is less compared to other places in Orissa.. The maximum temperature in this season goes as high as 42 deg C, while the minimum temperature hovers somewhere around 27 deg C. The summer season gives way to monsoons, which last from July to September. During this period, Konark experiences heavy rainfall. The city gets an annual average rainfall of around 152 cm. As far as the weather information of Konark is available, the winter season stretches on from October to February. In this season, the maximum temperature is around 25 deg C, while the minimum temperature may fall to 8 deg C. One can visit the splendid city of Konark during any season. The best time to come here comprises of the months of October to March, when the weather is pleasant.