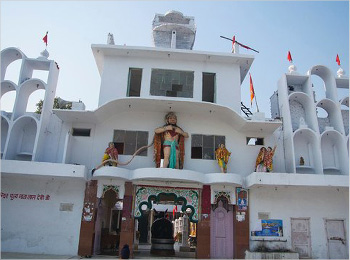 
The Shri Ram Tirth Temple is dedicated to Lord Ram. It is located about 11 kilometres to the west of Amritsar on the Amritsar Lopoke Road. The temple dates back to the days of the Ramayana and the place is famous for the ashram of sage Valmiki. 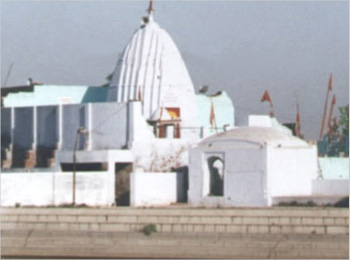 In this temple, the sage had given shelter to Sita, the wife of Lord Rama, when she was abandoned after victory in Sri Lanka. It was here that she gave birth to the twins Lav and Kush. The great epic Ramayana is also said to have been composed here by Rishi Balmik. It is also believed that the fight between Lord Ram Chandras forces and Lav and Kush had also taken place at Ram Tirth. The temple premises consist of a hut, where Sita Devi gave birth to her sons, a well with stairs, where she used to take her bath and an ancient tank, which is believed to be dug by Hanuman. Besides the Ram Tirth Temple, a number of temples are scattered in this area. The four day long annual fair of the Ram Tirth temple is held in the month of November on the full moon day. 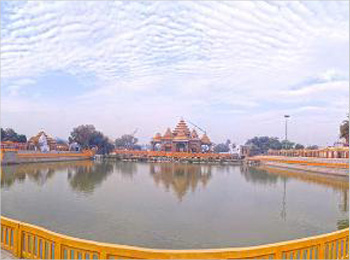 The place gets a special mention in the great Hindu epic “Ramayana”. This place was once the ashram of saint Balmiki. The saint is believed to have scripted many of his sacred manuscripts at this place. As per the mythological beliefs Sita got shelter in Maharishi Valmiki’s hermitage after Rama deserted her. After Mata Sita gave birth to Luv and Kush at this ashram, Bhagwan Valmiki trained and made them proficient in the realms of religious and social life besides intricacies of warfare. At the site of the temple there is a hut where Mata Sita gave birth to Luv and Kush. There is a large sacred tank here that is said to have been dug by Hanuman himself.

Making a special place in the holy scripts of ancient religions, the place was once the ashrama of saint Balmiki. The saint is believed to have scripted many of his sacred manuscripts at this place. A hut of Rishi Balmiki is still found at Ram Tirth where he once lived. After giving birth to Luv and Kush, Devi Sita used to stay at this place for a considerable period of time. The evidence of her stay still exists in the form a well which, it is believed, was dug by Hanuman. Devotees of King Rama and Devi Sita flock to this place every year to offer their prayers to the respected deities. As the locational position of the Ram Tirth is facilitated by easy accessibility, hence, the visitors conveniently reach this place of worship without any extra hassles. Another prime attraction of Ram Tirth in Amritsar is its four day long fair which is organized from a long time. Today, a large number of tourists across India come to visit this exotic place. A beautiful manifestation of the Ramayana, the Ram Tirth, Amritsar, captivates each and every visitor who steps into this quaint abode of divine characters.


Prime attraction of Ram Tirth in Amritsar is its four day long fair which is organized from a long time. Today, a large number of tourists across India come to visit this exotic place. A beautiful manifestation of the Ramayana, the Ram Tirth in Amritsar, captivates each and every devotee who steps into this quaint abode of divine characters. A big fair is held here about a fortnight after Diwali and for a duration of five days. Great importance is said to be the tank which is believed to have been dug by Hanuman. The circumference of that particular tank is about 3km and there are temples on its sides. A majority of the pilgrims consider it as very auspicious to have a dip in the sacred tank in the early hours of the Puranmashi (full moon) night. A 30 feet wide path of circumambulation (Parikarma) runs round this scared tank. After the holy dip, the pilgrims take a round of the tank while chanting mantars and exchanging salutations,"Ram Ram". Floating of tullas is a special feature of the fair. On the puranmashi night, women light lamps which are made out of kneaded flour and fed with pure ghee or mustard oil, place them on leaf plates or boat shaped carriers made of sarkanda reeds, and release them to float in the tank, reciting devotional songs and hymns, This ceremony called tulla toarna (floating of tullas) is believed to wash off the sins and to please Rama.


The nearest airport Raja Sani International Airport is well connected to the other parts of the country by regular flights. Today there are Jet Airways, Turkmenistan, Uzbekistan and Air India which offer flights to Amritsar from Delhi, Birmingham and London and few other places as well.


Amritsar is directly connected to rest of India via rail route. It takes about 6 to 10 hours to reach Amritsar by train from Delhi.