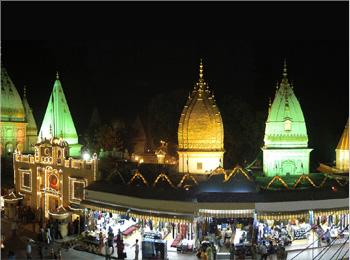 This temple also called Tirukantamenum Kadi Nagar in Devprayag, a pilgrimage town in Tehri Garhwal district. It is dedicated to Vishnu. It is located 73 kms from Rishikesh on the Rishikesh to Badrinath road. Architected in the Deula style, the temple is signified in the Divya Prabandha, the early medieval Tamil canon of the Azhwar saints. It is also one of the 108 Divyadesam dedicated to Vishnu, who is worshipped as Raghunath and his consort as Sita. 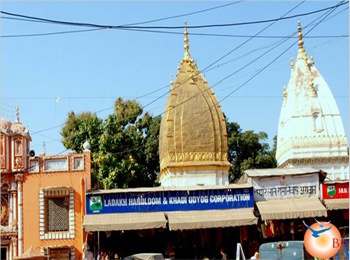 The temple is the foremost religious shrine of Devprayag in Tehri Garhwal District of Uttaranchal. The sculptures on the walls of temple are a combination of Buddhist and south Indian architectures.
According to legend, this temple was built by Raja Jagat Singh of Kullu. He took an idol of Lord Ram from his birthplace in an unethical way. To absolve this, he constructed the temple thousands of years back.
The present structure of the shrine was commissioned by Maharaja Gulab Singh in 1835, the founder of the kingdom of Jammu and Kashmir. The construction of the temple was completed in 1860 during the reign of Maharaja Ranbir Singh, son of Maharaja Gulab Singh.
The inner walls of the temple are decorated with sheets of gold on three sides and also feature the life of Lord Rama and Lord Krishna. There are several galleries in the temple comprising thousands of Saligrams. Telugu speaking priests carry out activities of the shrine.
The ancient temple, with a 15-foot tall statue of Sri Ram (Sri Raghunath), is one of the 108 most important Vishnu temples in India. In front, there is a statue of Garuda. Behind and slightly up a hill is Vamana's cave and nearby is Ram's stone throne.

This temple is dedicated to Lord Ram and his consort, Goddess Sita and his brother, Lakshman. 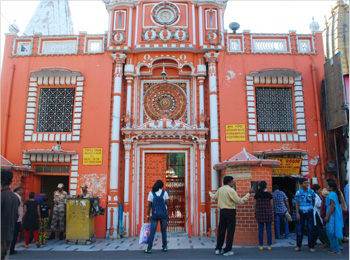 According to legend, the temple is associated with the time of the epic Ramayana. Raghunath (Rama, an avatar of Vishnu) is believed to have meditated at this place to ward off the curse of killing Ravana, a demon Brahmin king. Brahma, the god of creation, is once believed to have done penance at this place and the place came to be known as Prayaga. Acoording to mythology, the Banyan tree (Vataka tree) in the place would withstand all disasters and would remain. It is believed, Vishnu resides in the leaves of the tree. Pandavas performed penance at this place before the Mahabharata yudh (war). The wise Sage Bharadwaja is also believed to have performed penance here and became one of the seven sacred sages (Saptarishi). 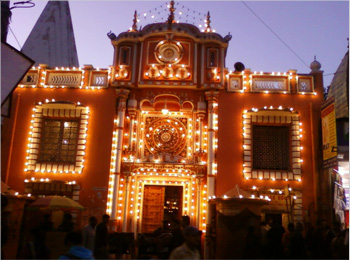 The temple is in existence from the 10th century and is believed to have been established by Adi Shankara. Garhwal (also the ruling dynasty), the region in Himalayas, where the temple is located, is referred with the name for the first time in a copper plate inscription in the temple from the period of Raja Man Shah. The temple had contributions from other rulers of the dynasty like Sahaj Pal, who donated a bell to the temple, as indicated by the inscriptions. Raja Man Shah, the other ruler of the dynasty made contributions and is indicted in the inscriptions from 1610. The place was ruled by Raja Prithvi Pat Shah as seen from the inscriptions in the door and doorways in the temple. King Jai Kirthi Shah, who ruled during 1780, ended his life in the temple as he was betrayed by his ministers.
The temple was damaged during an earthquake during 1893 and was subsequently built by the local king. Today, the temple is maintained and administered by the Uttarakhand Tourism Development Board.

Devprayag is situated 90 Km from Rishikesh. Rishikesh is well connected with major northern cities via motorable roads. There are various bus services available from Delhi to Rishikesh.