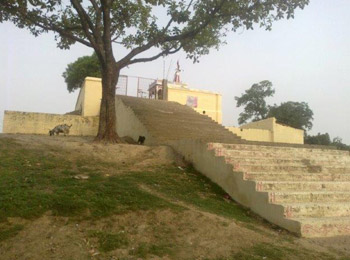 
The Raamchaura Temple is a Hindu Temple in the city of Hajipur, Bihar, India. Dedicated to Lord Ram, it is located at Raambhadra near Helabazar, Hajipur. As per local folklore, it is said to have been in existence since the Ramayana period and Lord Sri Ram is believed to have visited this place on his way to Janakapur, where his footprints are worshiped. 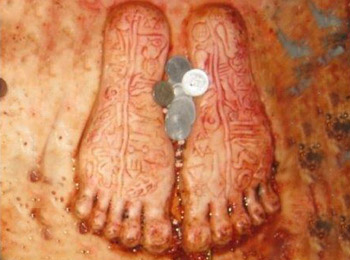 Ram Navami is celebrated with full zeal and enthusiasm. It is a festival, celebrating the birth of Lord Ram to King Dhasharatha and Queen Kaushalya of Ayodhya. Ram is the seventh incarnation of the Dhashavatara of Vishnu. The Sri Ram Navami festival falls in the Shukla Paksha on the Navami, the ninth day of the month of Chaitra in the Hindu calendar. Thus, it is also known as Chaitra Maasa Suklapaksha Navami, and marks the end of the nine-day Chaitra-Navaratri celebrations. Lord Sri Ram Chandra, the king of Ayodhya during his learning period had arrived here and had got his Mundhan done.

This footprint is at the altitude of 45 meters from ground. Bael (scientific: Aegle marmelos) is taken as offering on the eve of Ram Navami. During ancient periods many Saints, Mahatmas and Yogis used to visit these 'Sangats' and offer prayer. A popular fair is also organized here on the occasion of Ram Navami every year.