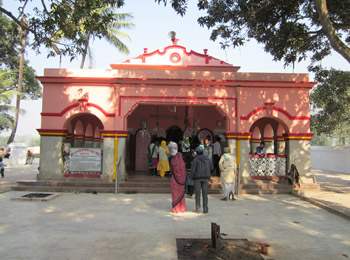 Purnia is famous for the oldest temple of Goddess Puran Devi, which is 5 km away from the city. Some people believe that many years ago Purnia was POORN-ARNYA which stands for complete jungle that’s why it became Purnia.

Goddess Puran Devi is a form of the revered goddess Kali. An idol of Pooran Devi can be seen totally covered with garlands and flowers. It is during Durga Pooja that one sees a maximum number of visitors here. Also the Shiva lingam is present. Goddess Puran is the composition of nine Goddesses.

According to legend, five centuries ago, there was a Nawab named Shaukat Ali, the landlord. Then this area was called Alamganj. There was also a saint named Hathinath. Once, the saint was taking bath in the pond, when a man brought an elephant to that place. He rudely asked the saint to make way for the elephant. The saint said the elephant should wait. The man said the elephant belonged to the Nawab and moved the elephant into the water. The saint, very angry, plucked its tusks. The elephant died, while the man fled the scene. From then onwards, the tusks have been preserved very carefully in a temple room. Nawab Shaukat Ali bowed before the saint with respect. He donated his entire land for the temple.

It is peaceful, though there are a fair number of devotees. Known for the practice of sacrifice, Pooran Devi temple came into existence when a hundred goats were beheaded.

The nearest airports are Bagdogra Airport and Patna Airport.

Purnia has its own Railway Station.