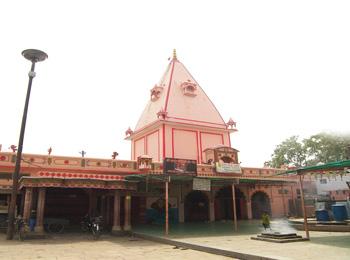 Prayaga means Prakrishta Yaga. This refers to the place where Lord Brahma did a very great Yaga. Hence its name became Prayaga. Prayaga is considered as one of the Sapta mokshapuras. This place is also called as Theertharaj, that means king of all theerthas. This is also the place of Triveni Sangamam. Generally we consider the confluence of two water flows as a holy place. But, here we can see the confluence of three holy rivers, Ganges, Yamuna and Saraswati. All the three rivers have their importance individually. Hence the confluence became very very holy place. One should take a holy bath here when visited this place. Here Kumbhmela will be conducted for every 12 years.

The three temples in Prayag Shaktipeeths are considered Shaktipeeths from three dfferent ideas. All the three temples are of mata Sati of Prayag Shaktipeeth. Here Devi Sati is called Lalita. The three temples are Akshaywat, Mirapur and Alopi. In Prayag, the fingers of mata Sati fell. Here Lord Shiva is known by the name of Bhav. In Akshaywat, there is a Laliteshwar Mahadev temple just nearby the Kalyani-Lalita Devi temple. According to Matasyapuran, in 108 Shaktipeeths this temple has been given the name of Lalita. The second Alopi temple that is considered to be the Shaktipeeth is around 500 kms from Daraganj in Allahabad. According to the importance of Prayag Shaktipeeth, Kalyani and Lalita are considered to be the same. According to legend, Laliteshwar Mahadev temple is situated in the holy premises of Akshaywat in Vayavya corner of north-west corner near the bank of Yamuna. In addition, another temple in Allahabad is considered to be a Shaktipeeth. This temple is of Bhagwati Kalyani. The idol of mata in this temple has four hands and is sitting on the Lion. There is glowing wheel on her heads.

The main deity is Prayag (three rivers meet here): Devi's ten fingers fell here and the idols are Devi as Lalita (beautiful). Another name is Alopi and Shiva as Bhava.

There are mainly three stories about the word Alopi. One story says that Alopi means the one who disappeared. After Sati dahana and Dhaksha Yagna destruction, Lord Siva disturbed mentally and lifted Satidevi’s body and roaming without any destination. Lord Vishnu cut Sati devi body parts by using Sudarshana Chakra. Every place, where Satidevi’s body part fell, became a Shaktipeeth. Prayaga is the last place, where last part of Sati devi’s body fell on ground. Here Sati devi body became disappeared, hence the name Alopi. There are some other stories about Alopi mata. In every temple, at least one idol or one symbol will be there for worshipping the goddess. But here, there is no idol or symbol. We have to imagine the goddess present on a wooden jhula. Hence the name Alopi. According to a local story, Alopi mata is a newly married bride. She disappeared from pallaki, when robbers attacked the marriage troop. As the bride disappeared as a miracle, she is worshipped as Alopi mata.

The Kumbh Mela is the star attraction here and it attract crowd in exorbitant numbers, both domestic and international as well. It is celebrated after a gap of every 12 years and on this auspicious period, people take bath in the holy water of Sangam. Navratri that falls two times in a year- one in the month of March or April and other in the September or October month depending on the Hindu calendar, is among the major festival here. Navratri are celebrated for over 9 days, with some people not eating any type of food that is derived from the soil for these nine days. Special ceremonies and rituals are carried during these days. Person (Almost every day) offers their offering to the god in form of fruit, milk, homemade sweets etc. Another festival that is celebrated with great enthusiasm is the ‘Shiv Ratri’ and during this day, people keep fast, pour milk on the Shiv Lingam and offers ‘Bail’ (A type of fruit) to the god idol.

Since Prayag is among the most worshipped place in Hindu culture, this place is full of accommodation arrangements. Even if the private accommodation is kept part, still the government plus the non-government organization comfort spaces are more. Since the turnaround of the people to this place is vast every time of the year, there is great business thriving in terms of hotels. But the good thing is that, there are ample numbers of good, yet cheap accommodation places available here. Beware of the touts that promise to provide good accommodation at cheaper rates.

Other places that can be visited nearby…