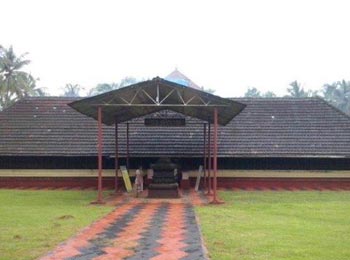 The sreekovil of Ponmeri Shiva Temple is squarish and the sopanam has got six direct steps. The base is made of granite and the entire sreekovil features exquisite wood carvings. The roof is covered with copper sheets. Sub-shrine of Lord Ganapati is attached to the Sreekovil. The chuttambalam was renovated 200 years ago. There are seven sub-shrines outside the chuttambalam.

The main deity is Lord Siva in the form of Sivalinga. The concept is that of Kirathamoorthy. Lord Brahma, Lord Sankaranarayana, Lord Subramanya, Lord Vishnu are the other deities. The peculiarity of the temple is the presence of 'Trimurti'- Brahma, Vishnu and Shiva. In addition to the Shiva, deities Vishnu, Brahma, Ganapati, Bhagavathi, Shankaranarayana, Adithya (Surya), Boothathevar (God of Spirits), Ayyappa, Murugan and Krishna are also installed in the temple complex. Ponmeri Siva is fondly called 'Thiyyannur Appa'. There is also a Krishna Temple in nearby Karat.

In the Eleventh Century AD, the Kadathanad Kings charged this awesome, great and astonishing Mahadeva Temple developed by the well known designer Perumthachan. The sanctum-sanctorum of the temple is interesting and unrivaled with an affected shivalinga with gold plated kappu (covering). Legend has it that because of a fight between the Ruler and the designer, the draftsman left the temple inadequate and thus the temple work should never be finished. "As deficient as the work at Ponmeri" goes an adage in Malayalam. Indeed, even today there are works going ahead to enhance different parts of the outer design of the temple. Today, Kshetra Samrakshna Samathi assumes a noteworthy part in temple remodel and advancement. One of the legends related with the temple is that Lord Siva went to a Namboodiri Illam (house) after He murdered Daksha (this occurrence occurred at Kottiyoor, according to the conviction). Feeling some celestial forces the Namboodiri led a prasna and as coordinated by the crystal gazer, he fabricated a temple committed to Lord Siva. Later the Kolathunad Raja had assumed control over the temple. Another legend says that Lord Siva in the mask of a Brahmin helped the laborers who couldn't put one of the light emissions temple while it was developed. At the point when the strengths of Tipu Sultan began to annihilate the temple, it is trusted that the divinity radiated a fire ball and the powers needed to withdraw from the temple premises. The temple is presently under the control of Malabar Devaswam Board.

Sivarathri and annual festival for eight days in the month of Makaram (January-February) are the main festivals.

How To Reach Vadakara