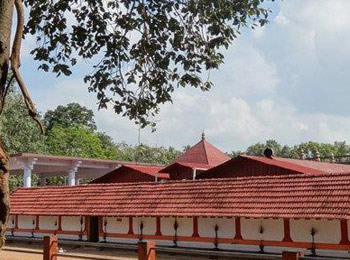 Centuries ago, the remaining members of the "Ettuveettil" family after conspiracy against Marthanda Varma settled down in the village named Kollam near present-day Koyilandy in Calicut district. They were well known as the diamond merchants. One of family members prayed to please goddess Badhra Kali.  Sree Porkali Devi is the family god of the Ettuveettil family. One night, goddess Sree Porkali appeared in his dream and gave him a special sword named "Nandhakam" and told him to pray to her in the form of this sword so she could answer all his prayers and also asked him to go to his home town. He went back to his hometown and built a temple and started worshiping the Nandakkam sword. The family became rich and powerful.  They paid the Samoothiri-king of Kozhikode, bought land there and settled down with their family.  They built a beautiful temple here and worshipped the Nandakkam sword.  It is believed that the eight families have migrated from south, namely Kiziyil, Vazhayil, Elayedathu, Echarathil, Punathil, Nanothu, Mundakil, Erothu.  The native people of this place call them as "vyapari"(merchants).

Kozhikode is well connected to other major cities of the country via regular flights.

One can easily get regular trains to Kozhikode from other major cities of the country.

There are regular buses from other major cities of the country to Kozhikode.