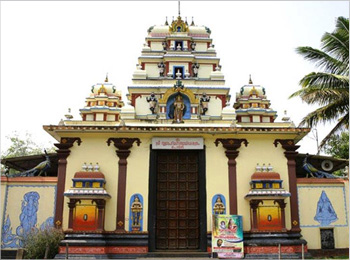 Perunna Subramania Swami temple is a Hindu temple located in Changanacherry. The main deity of the temple is Lord Muruga. This is the first temple in Kerala which was opened to all Hindus irrespective of the caste. On hearing about this, Mahatma Gandhi during his first visit to Kerala came to the temple and worshipped the Muruga for days. A grand ceremony was conducted at the east gate then.

Here, the furious form of Muruga is worshipped. The Vel (spear, weapon of Lord Muruga) is pointed downwards. Muruga is worshipped here in the form of Devasenapathy, the supreme army general. The lord is in an angry mood as he had just killed Tharakasura. He is facing east as seen in most of the temples. This is the only temple in which the Lord is in a furious form. Mahaganapathy, Ayyappan, and Krishna are some of the other deities.

Perunna is a holy place with a lot of temples. Tuesday is an important day in this temple. The poojas are done by Brahmins. December - January is the time of festival in this temple.

Changanacherry is well connected to other major cities.