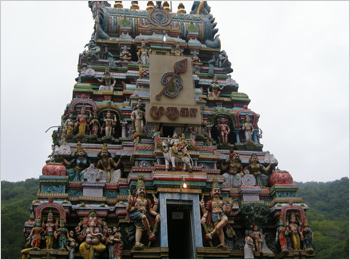 Pazhamudircholai - the sixth abode of Lord Muruga, as the name truly holds, is a fertile hill, graced by Lord Muraga, around 16 kms from the temple city of Madurai, in the southern state of Tamilnadu, India. It is blessed with Nature's bounty in the form of innumerable fruits, vegetables and natural springs This is the only Aaru Padai Veedu temples where Lord  Muruga gives darshan to his devotees along with both his consorts Valli and Deivanai. 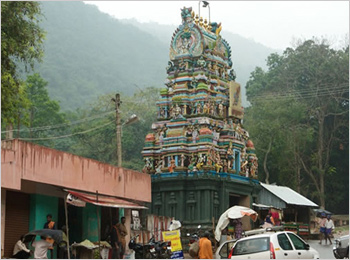 Pazhamudircholai is one of the six holiest Murugan shrines described by Sangham poet Nakkirar in his poem Tirumurukarruppatai. This Muruga temple is located in Northern Madurai, close to the Vishnu temple of Azhagar Kovil, which again is one of the 108 divya desams.This shrine is located on the northern outskirts of Madurai in a pleasant forested hill not far from Madurai. On top of the hill, the Noopura Ganga is seen.The Nupura Ganga atop the hill is said to have originated from the anklet of Tirumal. Legend has it that the Madavi Mandapa is seated beside the spring. It is a perennial waterfall with a temple dedicated to Rakkayi Amman. Rakkayi amman is otherwise known as Saravanabavai, representing the power of Vel, Lord Muruga’s weapon. Sitting in the madavi mandapa near the spring Ilangovadigal, is said to have written one of the five mahakavyas in Tamil viz. Cilappatikaram. Till date the place is very fertile with many trees and different flora and fauna a standing testimony to the vivid description of the place's natural beauty as found in Tirumurugattruppadai of Nakkeerar. Though the sthala is ancient, the temple in existence was constructed only recently. From days of yore Vel has been worshipped as the moolavar or main deity.

The sthala vriksha is an Indian Black berry tree. The fruits of this tree ripen during Skanda Sashti festival. The temple that was in existence during Sangam period, no longer existed in Arunagirinatha's time. The recently constructed temple is considered as Pazhamutircolai and worshipped by the devotees. Arunagirinathar praised this shrine in his Tiruppukal. Arunagirinatha sang 16 Tiruppugazh to Pazhamutircolai Muruga. God Vithaga Vinayaka is on the right of his younger brother.

The perennial spring 'Silambaru' known as Nooburagangai is considered as a holy water point. Devotees take holy bath in this spring. The water of this spring is sweet in nature and has medicinal values in it. Rituals for the departed souls are performed in this spring. here are other springs and theerthams in this hill known as Hanuman theertam and Garuda theertam etc. The pond known, as Moolavavi is unique, as water level rises in the summer and drops in the winter. Agasthiar is considered to have constructed this pond. Information about the holy water points of this temple is seen in Silapathikaram, even the sangam literary work Paripadal contains information about this hill. Fruit eating bats are seen in large number near the temple. 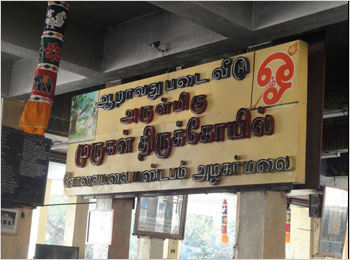 God Muruga is known as the God of the mountains. The word Muruga has several connotations such as sweetness youthfulness beauty divinity honey and such else. God Muruga gives darshan to his devotees along with both his consorts Valli and Deivanai.Here Murugan is worshiped along with his consorts Valli as Iccha Shakti and Devayani as Kriya Shakti and  himself as Jnana Shakti. The idol of the lord in standing posture with a single face and four hands is kept between the idols of his consorts. The Vel (spear) of the lord made up of stone is of special significance and is worshipped with a great veneration by devotees.

Avvaiyar, one of the great poets of Tamil Literature was tested at Pazhamudircholai. We all would have been familiar with the story ‘Suta pazham vaenuma sudathaa pazhalam vaenuma?’ Once when Avvaiyar was exhausted she rested under an Indian Black berry, wherein she saw a small boy seated on the tree and plucking fruits. The little boy enquired if she wanted some fruits to soothe her hunger and thirst, she happily accepted. The boy in turn asked if she wanted warm roasted fruits or cool unroasted ones. Avvaiyar mocked silently at his stupidity and reluctantly said she wanted unroasted fruits. The little boy shook the tree vigorously so the fruits of the tree dropped on the sand below, Avvaiyaar took the fruits in her hands and to remove the sand, blew air on the fruit. The little boy asked her if she was blowing on his roasted fruits to cool them.

Avvaiyar was astonished as to how a small village cowboy could have played such an intelligent drama. Blowing on the fruit to remove the sand was indeed poetically comparable to an attempt to cool "roasted fruits". Humbled by the immense poetic knowledge and clever wordplay of the boy, Avvaiyar begged the boy to reveal his true identity, unable to reconcile herself with the fact that a simple cowherd could have such profound thoughts.The boy then disappeared and in his place, Lord Muruga appeared. Avvaiyar, stunned to find herself in Divine Company, bowed in obeisance and realizing the infinite nature of knowledge, prayed to Lord Muruga to bless her and continue bestowing his Infinite Grace on her to aid her virtually endless quest for knowledge.

Wedding festival is celebrated along with Skanda Sashti festival.

This is the only Aaru Padai Veedu temples, where God Muruga gives darshan to devotees with both his consort Vali and Devayani. The Temple is also near to the Azhagar Kovil which is one of the 108 divya desam of God Vishnu.

The nearest airport to Pazhamudhircholai is in Madurai (9kms).

The nearest railway station is Madurai.

Regular buses are available from Madurai.