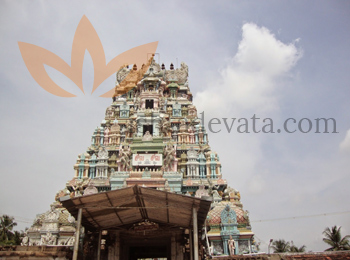 The Thiruppunavayil Shiva Temple is located in Pudukkotai in Tamil Nadu. It is the 7th of the Tevara Stalams in the Pandya region of Tamilnadu.This temple can be reached by travelling from Arantangi to Meemisal (38 Kms) and from there to Tiruppunavayil (12 Kms). This sivasthalam is located on the sea shore.Sambandar, Appar and Sundarar composed the thevara Pathigam on the lord in this temple. Legend has it that the 4 Vedas, Bhrama, Lakshmi and Mahavishnu along with Indra, Surya, Chandra, Yama, Airavatam, Vasishta and Agasthyar worshipped Shiva here. All of the 14 shrines in the Pandya Kingdom sung by the Nayanmars are said to manifest themselves here. There are 14 Shivalingams in this temple.

The temple dates back to the Panayd period. Massive walls surrounding the temple and the picturesque Rajagopuram beautify this shrine. The Nandi and the Shivalingam are huge here, and so is the vimanam crowning the sanctum. There are two entrances to the temple corresponding to the Shiva and the Ambal shrines. The presiding deity lord shiva is called as Pazhampati Nathar and the Ambal his consort mother Parvathy is called as Karunai Nayaki. The niches around the sanctum sanctorum are enshrined with Ganapati, Dakshinamurty and in place of Lingodbhavar, Mahavishnu is placed. Lord Hanuman is too found in this temple. The Nataraja Sabha here is referred to as the Sivagnana Sabha.The River Pambaru flows south of the temple. The sea is at a distance of 3 kilometres. As the place is just at the entrance (Punal) of the river and sea, the place is named Tirupunavasal – entrance place. The main tower (Rajagopuram) is 65 feet tall. The Brahmma theertha is outside the temple. There is only a small level of water in the tank. There are shrines for Pancha Vinayaka, 9 sons of Sage Kabila, ancient Shiva devotees, Dakshinamurthy, Aadhi Vinayaka of the place, Lord Muruga with His consorts Valli and Deivanai, Brhamma, Chandikeswara and Gajalakshmi. Mother Goddess Periyanayaki graces from a separate shrine facing east. The Kudavarai Kali Shrine is opposite the Goddess shrine.

There are one or two Holy Trees in the temples. As this temple is believed to be in existence during all the Yugas, four holy trees are attributed to this temple. Even the Kalli plant neglected and rejected many, also has the pride of being a holy tree here, indicating the truth that Lord accepts even that which is hated by others. During the Krutha Yuga, the place was known as Vajravanam and Indirapuram with Chathurakalli as the holy tree, as Brahmmapuram with Kurunda tree in Thretha Yuga, as Vruddhakasi with Magizha tree and as Pazhampathi with Punnai tree in Kali Yuga. All the trees are revered as the four Vedas.

It is generally said that the Shivalinga in Thanjavur Pragadeeswarar is the biggest. In fact, the Linga installed by Rajendra Cholan (son of Rajaraja Cholan) in Gangaikondacholapuram is bigger than the Thanjavur Shivalinga. While the Linga in Thanjavur is 12.5 feet tall, the one in Gangaikondacholapuram is 13.5 feet tall. The circumference of the Avudayar (the seat or throne on which the Linga is installed) is 60 feet round. Though the Linga in Tirupunavasal is only 9 feet tall, the Avudayar is 82.5 feet round. Therefore, while dressing the Avudayar, two people are required, one to hold the one of the dhoti and the other to go round to cover the Avudayar. Linga requires 3 Muzham (a scale basis) while the Avudayar requires 30 Muzham cloth. Based on this fact, a proverb also came later that “3 Muzham is for a round and 30 muzham also for a round.” A muzham is approximately 2.75 feet. Based on this measurement, Avudayar needs a dhoti of approximately 82.5 feet. Devotees place orders with the weavers for a 90 feet dhoti and offer it to the Lord. To perform the abishek to Lord Shiva, ladders are formed around the Avudayar to reach the height. They stand on the ladder and perform the abishek.

Lord Brahmma lost his position as the Creator as he was not able to explain the meaning of the Pranava Mantra. As advised by Mother Parvathi, He came to earth, installed a Sivalinga and worshipped to get back his position. Brahmma also created a tank to draw water for the abishek of Lord Shiva. As the spring was created by him, it is called Brahmma Theertha. Also, as Brahmma has four faces, He made four faces in the Linga too; hence the Linga came to be known as Chaturmuka Linga – Chaturmukha – four faces. This was the Linga worshipped by devotees in the early days. In the years that followed, King Sundara Pandian built a temple combining the tradition of both Pandyas and the Cholas. In the Chola temple, the main tower (Rajagopuram) would be small and Vimanam taller and in the Pandya temples it would be other way round. As the temple combines both traditions both are taller. The Shivalinga was installed on a big Avudayar (the seat for placing the deity) in the sanctum sanctorum. The Lord was named Vruddhapureeswarar indicating the age. Vruddha means old. In Tamil, He is called Pazhampathinathar. As the place is ancient as Lord Brahmma the Creator, the place is considered to be very old.

The annual Bhrammotsavam is conducted in Vaikasi. The eleven day Vaikasi Visakam (May-June) is grandly celebrated in the temple.

Surya puja (Puja to Sun God) is performed on Vaikasi Visakam star day (May-June) as the rays of the Sun fall on the presiding deity.

Relief from Mars aspects: Mars is one of the 9 planets. He himself was the subject of a curse of a sage. He worshipped Lord Shiva in this temple for relief from the curse. It should be noted that Mars is a powerful planet whose adverse aspects in the life of men would produce evil results. As Mars himself got the relief in this temple, it is known for its importance for a relief from Mars effects. Those celebrating the Valaikappu-Seemantham for the pregnant women, offer the first bangle to the Goddess. It is noteworthy, till today there is not a single maternity hospital in places around the temple. Their faith is so deep that by the grace of Kali, the delivery would safely occur in their respective house itself.

The nearest airport is at Trichy. One can easily get regular trains to Pudukkottai from other major cities of the country. Tiruppunvasal can be reached from Tiruchy via Pudukottai, Arantangi and Avudaiyar Kovil.You can also reach Tiruppunavasal from Madurai via Sivagangai, Kalayarkovil and Tiruvadanai.