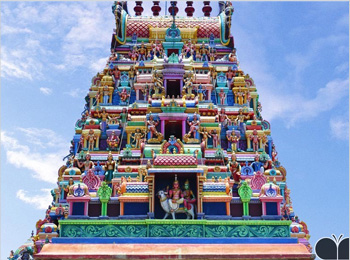 The Patteeswaraswamy temple is located in Perur and is dedicated to God Patteswaraswamy. The temple was built by Karikala Chola is located 7 kilometers west of near Noyyal river. Coimbatore has many temples out of which the Perur Patteeshwara Swamy temple is the most popular one. The temple features huge statues. The significance of Perur temple in earlier days is explained in the poetic creations of Arunagiri Nather and Kachiappa Munivar. 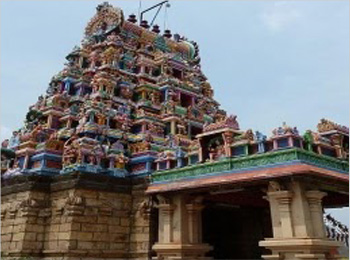 The Pattivinayakar shrine, dedicated to Ganesha, is a beautiful one. The Arasambalavanar shrine is dedicated to Shiva at the spot where Shiva is believed to have performed his Thandavam under a Peepul tree. The North and South Kailasam temples guard the two directions of the temple. This is one of the best among South Indian temples in terms of architectural and sculptural splendour. Dedicated to Shiva, this is a temple of great religious significance. The origins of this temple go back to the pre - Christian era. Karikal Chola is said to have built the innermost shrine of the temple. The Chola kings of the 11th through the 13th centuries made several endowments to this temple. The Hoysalas and the Vijayanagar emperors also made tremendous contributions to this temple. This temple was built by Karikala Cholan and later many other rulers also added to this temple's brilliant and exemplary architecture. This temple was even attacked by Aurangazeb despite which it seems to be unscathed. There is a statue in front of the temple which depicts a soldier wearing a dress similar to Aurangazeb. This temple has several impressive towers and mandapams (halls with ornamented pillars). The Golden Hall with the golden image of Nataraja the cosmic dancer (Shiva) is noted for its great beauty. Ten pillars have carvings of the various manifestations of Shiva. The roof has a series of stone chains. Perur temple is a unique blend of fine sculpture and exquisite architecture. There is a legend behind the construction of this temple. According to that, a calf of Kamadhenu while playing in the Arasu trees forest hit on a hard object and blood gushed out from it. Later a sacred ‘Siva Lingam’ was discovered from that place which led to built a temple here. The Garba graha, i.e the sanctum sanctorum that enshrines God shiva in the form of Shivalingam is believed to be built by the Chola monarch, Karikala Cholan. Chola, Hoysala and Vijayanagara rulers have gave architectural contributions to this temple during their time in power. Images of Kamadhenu and Bhoga Shakti are enshrined in the walls of the sanctorum. The inner circumambulatory passage that surrounds the sanctum sanctorum has images of 63 Saivite saints, Sahasra Lingam, Bhairavar, Surya and Chandra. The major attraction of the temple is the Kanaka Sabha or the â€˜golden hallâ€™, supposed to be built in the 17th century by the ruler Alagadri Nayaka of Madurai. It is exquisitely garnished with a gold plated statue of Nataraja showering blessings upon two sages namely Gowmuni and Pattimuni. The gopurams and pillars of the hall have beautifully carved out sculptures highlighting the Dravidian architecture. At the entrance, the temple has prominent figures of the Indian soldiers. Holy palm tree Irava Panai (the deathless palm) and a holy Tamarind called Pirava Pule (the unborn Tamarind) can be seen within the temple compound. Pilgrim from all over visit this temple to pay homage to their ancestors, as it is believed that after about 144 days the mortal remains of the dead turn in to white stones. On the bank of the temple tank, there are two additional temples to Shiva and one of these temples is known as Arasambalavaanar temple. Besides these, there are also shrines dedicated to Bhairavar and Nataraja. 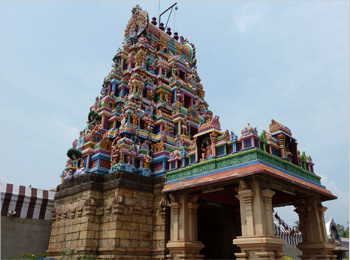 God Shiva is the presiding deity of this temple who is known as 'Patteeswarar' and his consort Parvati is known as 'Panchanayaki'. The idol in the temple is believed to be 'Swayambu Lingam'.

Next to Chidambaram, Arudra Darshan-Margazhi Tiruvadhirai is the main festival in the temple. 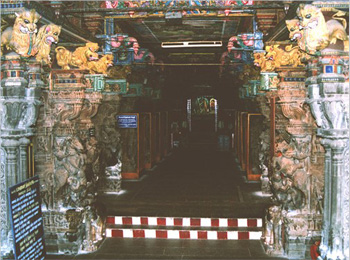 Coimbatore is a major railway junction on the Southern Railways and has trains to Chennai, Rameshwaram, Madurai, Bangalore, Mumbai, Kanyakumari, Kozhikode, Mettupalayam, Kochi and Delhi.

Coimbatore is connected by road with all major places in South India. For local transportation, city buses, taxis and auto rickshaws are available.