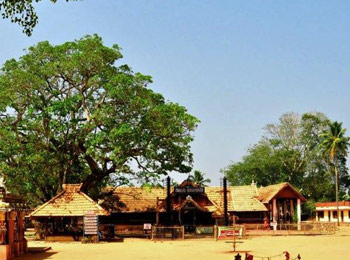 Pattazhy is located in Pathanapuram Taluk in eastern Kollam, Kerala. It is best known as the site of an ancient Bhagavathy temple, Pattazhy Devi Temple.

Pattazhy Devi Temple is built in the place where Devi had appeared. A throne was built on top of the well that was found there. The belief is that the throne is blessed with the divine presence of Devi The Kannambally Kavu nearby is believed to be the Devi's first place of manifestation. In this temple one can see Devi's ‘ponnin thirumudi’ (golden headgear) made of gold and rare precious stones. Annadhanam (mass feeding), Panthanazhi etc are the other offerings to please Devi.

Pattazhy Desham (kingdom) was gifted by King Marthanda Varma on behalf of Pattazhy Devi. The legend behind Pattazhy Devi says that in ancient times, this powerful abode of Devi (Goddess Parvathi) was a plantain farm belonging to the family of Keezheveetil. Once, a virtuous and beautiful woman appeared briefly before the patriarch of the family. A deep well and a piece of red pattu (silk cloth) were seen in this place where the Devi had appeared, and to commemorate this appearance, a throne for Devi was built on top of the well. Then the Pattazhy Devi Temple was constructed, and the sanctum today is the consecrated throne. The Kannambally Kavu nearby is believed to be the Devi's first place of manifestation. Devi's divine presence was also felt in the nearby place called Mannady where devotees constructed another temple for her. Pattazhy Devi Kshetra Samrakshana Samithi registered in 1971 has been involved in the preservation of the historic temple and its traditions. The word ‘Pattazhy’ can be explained as ‘ocean of compassion’ (pattu: soft, silky; aazhy: ocean). The name ‘Pattazhy’ could also be derived from the word ‘Bhattarika’ meaning ‘a virtuous and pious woman’.

The annual festival at Pattazhy Devi Temple is one of the largest temple festivals in central Travancore. Ponnin Thirumudi (Devi's image carved out of pure gold and rare precious stones) Ezhunnallathu is an event where the goddess is taken around in a procession. It takes place on the day of the star Thiruvathira in Minam (March–April). The festival is known for the Kambam (fireworks), Aalpindi Vilakku Ezhunnallathu (a procession taken with small structures made out of plantain and leaves of the coconut tree with many lamps placed on it). Other festivals in this temple are Kumbha Thiruvathira (February–March) and Pongala Utsavam in Makaram (January–February).

The daily and spiritual rituals in the temple are Archana, Chuttuvilakku, Thulabharam, Kadum Payasam, Ganapathy Homam, Parayidal and Bhagavathy Seva.

Nearest airport is at Thiruvananthapuram (90 kilometres). Cochin International Airport is 175 kilometres away.

The nearest main broadgauge stations are available at Kollam (38 kilometres) and Chengannur(41 kilometres). However the nearest railway station is at Kuri H.S/Thalavoor (7 kilometres) connecting to Kollam. The nearest town Kottarakkara is well connected to all parts of kerala.

There are regular KSRTC bus services from Kottarakkara to Pattazhi every 15 minutes. The town is also well connected by KSRTC services toPathanapuram. Private buses connect Pattazhi to Puthoor, Chavara etc.