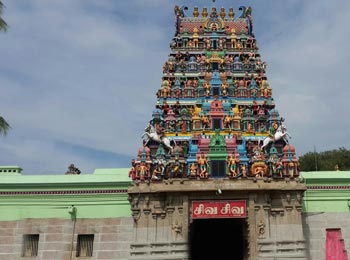 The Pattamangalam Dakshinamurthy Temple is where the 33rd Thiruvilayadal(Holy play) of Lord Shiva took place. The presiding deities are those of: The famous Lord Dakshinamurthy, Lord Shiva as the Moolavar and goddess Umadevi placed as Navayadi kali. It is one of the most famous temples in South India along with being one among the main guru temples in Tamilnadu. It is located at distance of 8 and 9 Kms from Sivaganga and Thirupatthur consequtively. There is a separate temple of Paravthi devi at a few hundred metres from the main temple.

Sundreswarar and Meenakshi Amman are the presiding diety however the temple is known as the guru temple. In a separate shrine is the Lord Dakshinamurthy where unlike all the other places (south facing) the deity faces east making the temple the only place where the deity faces east and not south. At the back of the temple is the huge sacred banyan tree which is well spread with a lot of hanging roots. Devotees circumambulate 108 times to get their boons.

The sacred tank here is known as Pottramarai and the Banyan tree is also called as sthala vruksha. Lord Dakshinamurthy sits here in Veerasana posture, wearing cresent moon and Kondrai flower holding Agni in the upper right hand, Gnana Mudra in the lower right hand and in the upper left hand a serpent and the lower left hand in his lap.

Lord Vishnu and Lord Brahma reside in the Vraha-Swine avatar and swan avatar respectively. In Pattamangalam, Lord Shiva played some role in the Thiruvilayadal for the protection and benefit of his devotees. Behind the Shivalinga, Lord Shanmugha Nath resides facing east with five heads accompanied Valli and Deivanai -his consorts.

The Ashtama Siddhi Subramanyar temple (aka Thayumanavar) is outside the main temple. Kadamba Rishi(who is closely related to with the legend of Thirukoshtiyur Divya Desam) had his ashram at Kadamabavanam in Pattamanagalam (Kadamba tree is the sthala Vriksham of Madurai Meenakshi Amman temple because Madurai and Pattamangalam were once filled with Kadamba trees)

The sage Kadamba Rishi is present in a separate shrine in the form of “Adaikalam Katha Ayyanar” with all his Parivara deities because he was once disturbed by Hiranyakasipu the demon and he cursed that if he came close to that place he would be dead. Under the Erazhinjil tree the shrine is present with all his Parivara deities. He is called so since he gave the refuge to devas when they were suffering due to Hiranyakasipu. The Thiruvilayadal garden and Pathinettaampadi Karuppar shrine is to the east of the temple

sage Brungi and Nandi Deva were being told stories by the Lord. Kruthika maidens (Nidardani, Aparakendi, Dekanthi, Vardhayendhi, Amba and Thula) came there and begged Lord that they too may be gifted with the Ashtama Siddhi art. Although Lord Shiva was reluctant Umadevi recommended favouring them. The maidens did not learn the art, their attention being elsewhere and hence were cursed by Lord Shiva that they become rocks in Pattamanagalam. They apologized by falling at his feet to be relieved from the curse hence the lord said that they would be rocks for 1000 years and he would come there from Madurai and grant the relief which came in Pattamangai (Pattamanaglam). Mother Uma (Navayada Kali) was also cursed for her recommendation but was later relieved after a severe penance.

Aaru Kala Puja system – six time pujas a day is held at the temple as per Shivagama rules. In August-September Vinayaka Chathurthi, September-October - Navarathri, November-December - Karthikai Deepam, in February-March Masi Magam and Shivrathri. The Pradosha Pujas are devotionally observed in the temple.

the shrine of Lord Dakshinamurthy and the banyan is circumambulated by the devotees 108 times to make their life happier without any evil remaining or peeping again and blessed with all wishes, children and prosperity by offering the usual Abhishek, aaradhanas and Vastras to the lord.

Devotees circumambulate the temple thrice to realize their wish, 5 times to succeed in efforts, 7 times to become noble and develop high ideals and peace of mind, 9 for a child, 11 for longevity, 15 for prosperity and 1008 times to win in love affairs and get the girl of their choice.

In Madurai is the nearest Airport.

Busses are available every 30 minutes from Tirupathur and Sivaganaga because Pattamanagalam is only 8 Kms away from these places.