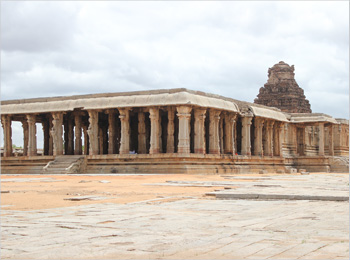 The Pattabhirama Temple is a major pilgrimage center in the ruined city of Hampi. Along with the Virupaksha and Vitthala temples, the Pattabhirama temple embodies the prolific temple-building ventures of the Vijayanagara rulers.

Devotees from different all over the world come to visit this temple and shrines to pay their homage to their titular deities; it is 353 kilometres from Bangalore, in the south Indian state of Karnataka. Hampi has a history from the epical age of Ramayana, ages before the Vijayanagara Empire was born. Hampi has an epical history as the capital city of Kishkindha, the monkey kingdom during the era of Ramayana. It was built by Krishna Devrai. Pattabhirama temple on the south of the sacred river Tungabadra located in scenic hilly surroundings is the largest among the ruins. This wonderful temple is noted for its largeness. There is a capacious hall in front of the temple.

Known for its splendid architecture, the temple complex is restricted within a large rectangular arena. The sanctum sanctorum with its axial mantapas is situated in the centre of the courtyard. A pillared colonnade runs along the inside of the wall round the courtyard. The east-facing sanctum is a tri-tala vimana with an antarala, ardha-mantapa and maha-mantapa. The large and square maha-mantapa is a finely proportioned seven aisled structure with tall and slender composite pillars of various types. To the east of the ardha-mantapa is the usual covered pradakshina-prakara enclosing the garbha-griha and the antarala.

Now, the ruins at Hampi remind its people of the greatest land of culture, music, art and architecture, which continues to exude a charm, that is just mind-blowing. 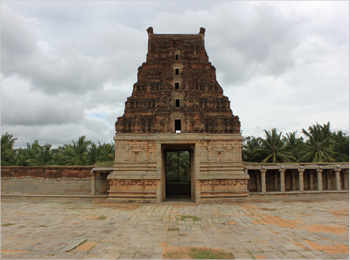 This presiding deity of the Pattabhi Rama temple is Lord Rama. 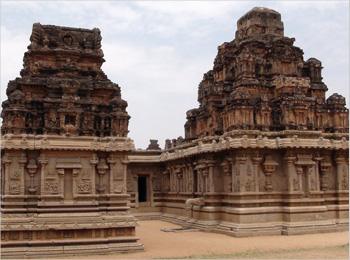 From November to February

The Pattabhirama Temple stands on a secluded location. However, it can be easily accessed from any place in Hampi.

The nearest airport is at Bellary, situated at a distance of 974 km. The airports at Belgaum (190 km) and Bangalore (353 km) can also be accessed to reach Hampi. There are other modes of transport to reach Hampi from these places.

The nearest railway head is at Hospet. Visitors can reach Hampi from Hospet by travelling for 12 km by road. There are frequent buses that ply between Hospet and Hampi.

Hampi is well-connected by the road network. There are several buses that connect Hampi to the nearby towns and cities. Private cars and vehicles are available from Bangalore and Mysore to reach Hampi.

Open from dawn to dusk