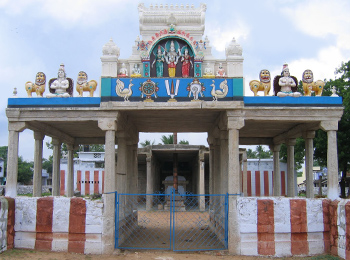 Panduranga Vittaleswarar temple is situated in Vittalapuram, Tirunelveli district, Tamil Nadu state, India. This temple is said to be over 500 years old. It is referred to as Dakshina Pandaripuram . It is one of the two ancient Panduranga temples in India. Those who belonged to the family of great Panduranga devotees such as Purandaradasa, Ramadevar, Tukaram, Gnanadeva used to visit this temple to worship the Lord Panduranga.

There is a 16 pillar mandapam in the front of the shrine followed by a larger mandapam with the kodimaram and Balipeetam. The Kodimaram (Dwjasthambam) is taller than the tower. Lord Garuda, the vahana of the Lord is seen facing west, towards the lord. Lord Perumal is a swayambumurthy. The handsome Panduranga with his hands on his hip posture as in Pandaripuram, is accompanied by Rukmini and Satyabhama. The three of them steal the heart of every devotee visiting this shrine. The chaturbuja utsavar, graces with Mothers Bhama, Rukmini, Bhoomadevi, Sridevi and Neeladevi near the garbagraha. There are also separate shrines in the prakara for Bhama, Rukmini, Senai Mudalvar, Udayavar. Rukmini shrine is artistically built.

According to the sthalapurana of this temple, Lord Panduranga of Pandaripuram (Maharashtra) appeared in the dreams of the Vijayanagara Chieftain, Vittalaraya, while he was on his way to a battle against the Travancore King. In the dream, Panduranga expressed his desire to provide darshan in the South of India as well. He wanted a temple to be built. As directed by Panduranga, Vittalaraya came to this village and discovered the Pandaripuram idol buried in the banks of Tamaraibarani River. He installed the Panduranga idol and constructed this shrine, a few kms west of the river, and named the village as Vittalapuram (previously known Nattarkulam).

Having received the blessings of Lord Panduranga, Vittalaraya proceeded with his campaign accompanied by his huge army and reached Suchindrum, near Kanniyakumari. In a sudden turn of events and much to his surprise, the ruler of Travancore agreed for a favourable settlement without going to the battlefield. Glad at this speedy and positive end to his campaign, as a thanking gesture, Vittalaraya returned to the Panduranga temple in Vittalapuram. Staying here, he put in place a process and provided financial support for a daily six time pooja as well as to conduct of festivals round the year.

The nearby airport is Madurai Airport.

The nearby railway station is in Tirunelveli.