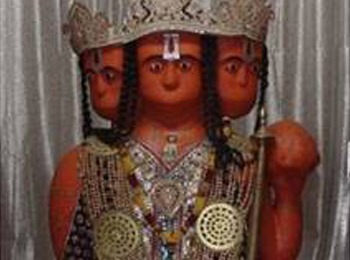 Guptar Ghat, arranged on the banks of River Sarayu, is accepted to be where Lord Ram took 'jal samadhi'. It is trusted that at the ghat, Lord Ram suffocated himself and left earth for 'Vaikuntha', the perfect house Lord Vishnu.

Panchmukhi Hanuman Temple devoted to Lord Hanuman is situated around 100 mts before Guptar Ghat on the route to Guptar Ghat in Faizabad, Uttar Pradesh and can be reached by own transport. Here five confronted Hanuman icon is introduced in the sanctuary. Another south-bound little Hanuman sanctuary is additionally worked inside the premises. A tremendous Yagyashala was constructed here in 1924 by R.C. Hobert (the then representative official) and a large yagya was performed amid that year. Tuesday and Saturday are viewed as favourable.

How to Reach Faizabad

The Lucknow airport is the nearest airport to Faizabad, which is located at a distance of 130 km from the city. It is well linked to the major cities of the country and for international flights, one need to come to Delhi Airport. Easy availability of taxi and other vehicles from the airports makes it quite easy for everybody to reach the city of Faizabad.

The city itself has a railway station of its own that is well linked to all the major cities and towns of the country including Lucknow, Delhi, Varanasi and Allahabad. The tourists can easily reach the city by train.

Faizabad is well connected to other major cities of the country via regular buses.