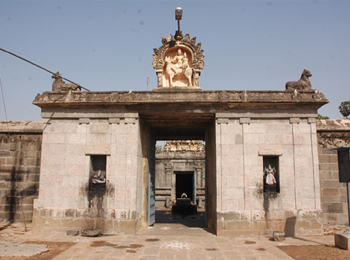 Lord Brahmma the creator also had five heads as Lord Shiva. Brahmma grew proud of this equality. It so happened once that Mother Parvathi mistook Brahmma as Lord Shiva and extended the honours which Brahmma did not refuse. The confusion arose because both had five heads. Lord Shiva removed one head of Brahamma. Brahmma realized His pride punished him and begged Shiva’s pardon. This event took place here. As Lord Shiva removed one head of Brahmma, He is named Vadukeeswarar

Wedding festival is celebrated on the Tamil New Year day falling almost on April 14 or a day before or after occasionally in some years, Vaikasi Visakam in May-June, Shivrathri in February March, Tirukarthikai in November-December, Skanda Sashti in October-November and Thai Poosam in January-February are the festivals celebrated in the temple.

There are 8 pillars in the Artha Mandapa before Lord’s shrine. Worshipping Lord at this spot would bring royal honours and benefits to the devotee. Saint Gnana Sambandar had praised the Vadugur Lord in his hymns. Mother Tirupurasundari is gracing with Mahalakshmi attributes from a separate shrine, bearing the name Vadugur Nayaki.

Special abisheks are performed to Lord Vadugeeswarar and Lord Bhairava on Ashtami days for removal evil effects. Those facing problems in wedding matters and suffering from illnesses perform abishek to Lord Bhairava with honey and sugarcane juice and feed the dogs.

Lord Muruga on his peacock vehicle turning left graces with His six faces, 12 hands and weapons. Saint Arunagiriar in his Tirupugazh hymns ensures that the devotee would be relieved of all his/her sins if they worship Muruga in this form.

Mother Durga graces from wall around the sanctum with Her hands ready for a war. Devotees pray here for success in their efforts. Lord Arthanareeswara is on Her left and Lord Pradosha Nayanar on the left. Lord Vinayaka is praised as Valampuri Vinayaka.

The nearest airport at Chennai.

The Nearest railways stations at Kandamangalam.

Tiruvandarkoil is 20 km from Pondicherry on the Villupuram road. Bus facilities are available