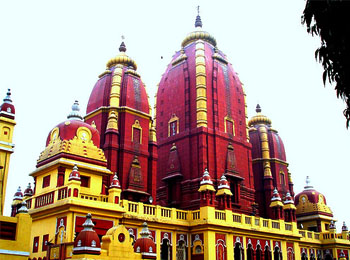 The sacred Panch Mandir is situated in a beautiful city of Kapurthala of Punjab. The city is famous for its number of gardens and palaces which are constructed in the Indo-Saracenic or French style of architecture. The architecture depicts the princely past of the city. This temple is one of these ancient monuments and is visited by thousands of devotees each year.

The Panch Mandir was constructed during Sardar Fateh Singh’s era and consists of five small temples. There are five different Gods and Goddesses worshipped at the temple. All the five deities are visible from the entrance due to its spectacular and innovative architecture. The temple comprises of a huge structure in the centre which is circled by various temples. Thousands of devotees, pilgrims, archaeologists and tourists visit this temple during the year. Accommodation facilities are available for the visitors at the temple.

The prayers are held in the morning and in the evening. Large number of devotees visits this temple to get peace of mind and soul. The architecture of the temple looks mesmerizing during full moon nights and it is believed by the devotees that it creates a kind of spiritual connection between the nature and the devotees. Many archaeologists know this temple as the marvel of golden past and its model is also kept at the Lahore Museum, Pakistan.

How to Reach Kapurthala

The Raja Sani International Airport in Amritsar is nearest to the temple. It is almost an hour and a half away from the temple and is connected to all the cities of India.

The railway station of Kapurthala is nearest to the temple. It is located on the Jalandhar-Ferozpur railway line but is connected by a few trains only such as 2JF Passenger-Down, 1JF Passenger-Up, 7JF Passenger-UP, 9226 Express-UP etc.

Frequent road transport is available till the temple as it is located on the Ferozpur-Jalandhar road. The devotees can take the private or government bus that run to and from Kapurthala or hire a taxi to reach the temple.