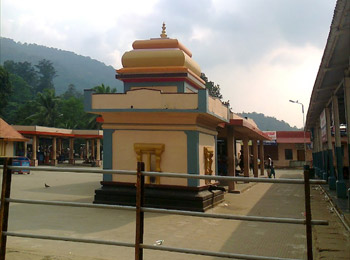 Pampa Ganapathi Temple at Pampa, 60kms from Pathanamthitta town and 8 Kms from Sabarimala, has an important roll in the Sabarimala pilgrimage as it is the main halting point. This is the first temple and holy spot on the way from Pamba to Sannidanam – the Sabarimala Ayyappa Temple. Neelimala, Appachimedu, Sabareepeedam, Saramkuthi are the other holy places enroute. 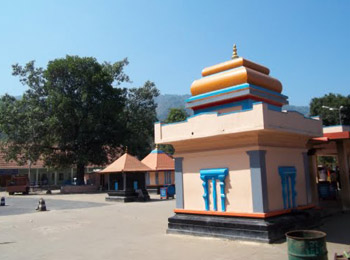 The temple is reached by climbing about 102 steps. The temple also has subsidiary shrines dedicated to Nagarajavu (Serpent deity), Goddess Parvati Devi, Adimoola Ganapati, Hanuman Swami, and Bhagvan Sri Ram. The river bank or arat kadavu in front of the Ganapathi Temple at Pampa is the spot where the utsava murti of Ayyappa from Sannidanam is taken for ceremonial purification at the end of 10-day Sabarimala Ayyappa Temple festival (March – April). On the same day after the purification ritual, the utsava murti or procession idol of Lord Ayyappa is taken to the namaskara mandapam to enable devotees to offer nirapara. The temple is open on all days unlike Sabarimala Ayyappa Temple which is open only during Madala kalam and during for monthly puja.

Sabarimala pilgrims from different route meet at Pampa and then proceed to Sannidhanam. During early days of the pilgrimage, pilgrims faced many difficulties at Pampa. On performing “Prasna chinda”, the presence of Ganapathi was found and a temple was consecrated. Based on “Jyothisha prediction, the deity of old Ganapathi was consecrated as “Adi Ganapathi” as lord of Sidhi and Budhi.

The main Prasadam at the temple is modakam – sweet ball – Modakam can be purchased from the counter near the Ganapathi temple at Pampa. The main offering at Pampa Ganapathi Temple is coconut. Devotees break a coconut here before climbing the mountain.

Prayers are offered here for a safe trek to Sabarimala Sannidanam.

How to Reach Pampa, Sabarimala