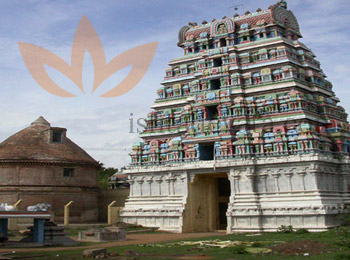 The Sri Palaivananathar Temple is located at Papanasam in Thanjavur district of Tamil Nadu and is dedicated to God Shiva. The chief deity in this temple is Palaivaneswarar. Amman is Thavalavennagaiyal. This temple is one of the 274 Sivalyam Koil. 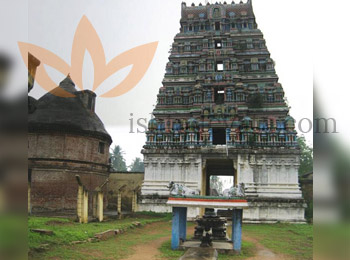 This famous historic temple is mentioned in the hymns of the Ganasambandar. According to the Hindu mythology this temple is the 19th Shiva temple which is praised in the Thevaram hymns. It is the 19th temple located on the southern bank of the Cauveri River. The chief deity of God Shiva is in the form of a swayambumurthy. It is known that the great God Rama had installed around 108 shivlingams here and worshipped them. The God and the Goddess bless the devotees here in their wedding dress and garlands. In the prakara of the temple, one can get blessings from God Vinayaka, Oordhvatahandava, Dakshinamurthy, Brahmma, Goddess Durga and Chandeswara. This place is known as Palathurai for one particular reason i.e. because of the palm tree which is the Holy tree of the temple. The shivlingas in the temple are of utmost prominence. It is known that they were worshipped by great Gods and sages like Vinayaka, Subramania, Somaskandar and sage Vasishta. The temple’s beauty is enhanced through the amazing shrines of Nataraja, Bhairava, Sun and the Moon.

Once upon a time, many cruel and wicked sages organised a huge yagna in Tharukavanam. They chanted a lot of ill and evil mantras to kill God Shiva. They created a tiger so that God Shiva could be killed. God Shiva, being powerful and mighty, killed the tiger and used its skin as his dress. This event had happened at this very place. This place has a lot of names like Brahmmavanam, Palaivanam, Arasvanam, Punnahvanam etc. It is also one of the Sapthasthanas in and around Tirunallur. One another story that is related to this place happened during the forest life of the Pandavas. Arjuna was guided by sage Dhoumya to come to this temple and was told to worship God Shiva here. He did so and learnt all the techniques of archery as well. Arjuna also went deep down the earth here and married Uloopi. Another legend says that God Rama worshipped to God Shiva here so that he could be forgiven and pardoned of the sin of killing the Rakshasa Ravana. As God Shiva cleared him of his sons, this place came to be known as Papanasam. There are a lot of Shivalingas installed in the mandapa of the temple in a balanced manner on the Ayudayars.

Devotees come here in large number. Most of them pray for their problems to be ended as far as progression of marriage is concerned. Many newly married people come here and pray for child boon. Once their ambitions are fulfilled, they offer clothes to the God and also perform abhishekam.

Papanasam is on the Kumbakonam-Thanjavur highway on the banks of Kudamurutti river. Bus stop is at the entrance of the temple. On the rail route, the devotee can get down at Papanasam station and reach the temple 1km northeast

The nearest airport to this temple is Trichy airport.