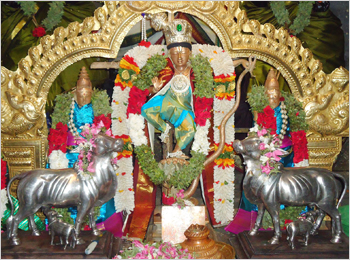 Oothukadu Kalinga Narthana Perumal Temple is dedicated to Lord Vishnu. It is located at Oothukkadu is a small village in the Papanasam taluk of the Thanjavur district in Tamil Nadu, India.

Sage Naradha prayed to Krishna to remain in the village in the dance posture and bless the devotees. Hence it is believed that Lord Krishna remained in the dancing posture in Oothukkadu.

The idol of Sri Kalinga Narthana Perumal within the inner sanctuary of the temple is about 2.5 ft high. Lord Krishna, portrayed as a five-year old boy, is seen dancing with His left foot on the serpent’s head and his right leg in the air. Krishna is depicted holding the tail of the serpent with His left hand and showing Abhaya Mudra with His right hand. It is so intricately sculpted that one can insert a thin piece of paper between the Lord’s left leg and the head of the serpent. According to the temple Bhattacharya, the beauty is that the weight of the Lord’s body rests on the left hand that holds the serpent’s tail. One can also see the scars on the right leg of Lord Krishna formed due to the violent beating from Kalinga’s tail. The shrine has gained fame as a “Parihara Sthalam” for “Raghu Dosham” and “Sarpa Dosham.”

Mahakavi Venkatasa Subbhayyar, popularly known as Venkata Kavi, who lived in the 17th century CE spent his entire life in front of the thulasi mada composing a number of melodious songs in praise of this deity. Due to the extreme devotion of Sri Venkata Kavi to the Lord, he is believed to be a reincarnation of Sage Naradha who witnessed the Lord’s dance in the village.

Some of the famous songs of Venakata Kavi are: “Thaye Yasodha,” Ali Payudhe Kanna,” Paal Vadiyum Mugam”, “Asaindadum mayil”, “Enna Punniyam” and “Aadadhu Asangadhu Va Kanna”. The starting verses of some of these songs can be found on the temple walls. It is believed that Lord Krishna appeared in person and danced to these melodies. Lord Krishna also performed the entire Kalinga Nardhanam for the pleasure of Sri Venkata Kavi.

The shrine is also visited by devotees who pray for quick settlement of marriage alliances and birth of offspring.

How To Reach Thanjavur

There are no regular flights from other major cities of the country to Thanjavur. Nearest airport is Civil Airport.

Thanjavur is well connected to other major cities of the country via regular trains.

You can easily get regular buses to Thanjavur from other major cities of the country.