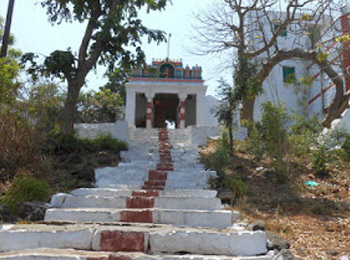 Odhimalai Andavar Temple is situated at Coimbatore, Tamil Nadu. This temple is dedicated to Lord Muruga. 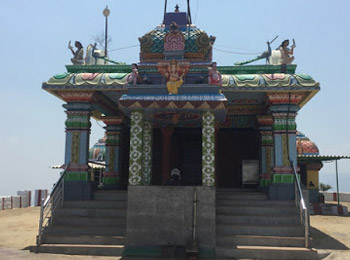 The temple, which is known as Odhimalai Andavar Temple, is perched atop a hill. There are around 1,880 steps to reach the temple situated on the hill. Vehicles cannot go up to the temple. There is a shrine for Lord Shiva at the foot of the hill. Along the way is a sannadhi for Lord Ganesha. This hill temple is constructed with Kasiviswanatha on the right of Lord Muruga and Mother Visalakshi in the left, a form known as Somaskanda form. There are also separate sannadhis for Brahmma, Naagar, Idumban, Viswanathar, Rajarajeswari, Sapthamathas. The Theertham of the temple is Sunai theertham and the Thala Virutcham is Odhi tree. 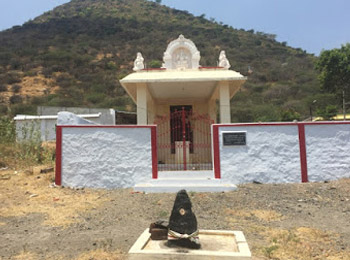 The presiding deity is Lord Muruga named as Odhimalai Andavar. Lord Muruga gives darshan in standing posture with 5 faces and 8 arms facing east. Since Muruga of this temple is a young lad before the Soorasamharam, the vahanam behind the idol is considered to be Indran in the form of the peacock. (After the Soorasamharam, Lord Muruga transformed a portion of Suran into his vahanam, the peacock and another portion into the cock on his flag.) He has one foot forward, as if he is ready to rush to assist his devotees. The right lower arm is in abhaya mudra and the left lower arm is in varada mudra. In his right upper arms he holds the sword, arrow and vajram. In this left upper arms he holds the shield, bow and paasam.

Although Lord Muruga is believed to have disclosed the meaning of Pranavam ‘Om’ to His father Lord Shiva at Swamimalai, Odhimalai Temple follows the same legend. The temple is called Odhimalai because Lord Muruga recited (‘odhuthal’ in Tamil means ‘recital’) the meaning of pranavam to Lord Shiva. Another belief is that in Irumbarai, Muruga taught the Agamas of the Vedas. ‘Odhal’ in Tamil means ‘learning’ and ‘malai’ means ‘hill’. Since Lord Shiva learnt these philosophies from His son Muruga over here, the place came to be known as Odhimalai. Muruga is also known as Odhimalai Andavar.

As per legend, a long time ago Lord Brahma had no respect for others believing that, as the God of creation, he was the best. Lord Muruga, wanted to teach him a lesson and asked him the meaning of pranavam which Brahma could not elucidate. As a result, Lord Muruga imprisoned Lord Brahma in an iron room at Irumbarai (in Tamil, ‘irumbu’ means ‘iron’ and ‘arai’ means ‘room’), about 3 kms from Odhimalai. Lord Shiva pacified Murugan and released Brahma from the prison.

As a prayer commitment, devotees perform abishek with milk and sandal, offer vastras-clothing to the Lord.

Even today, the sand at the spot where Bhogar is believed to have performed his yagna is white. On festival days, this sand is offered as prasad to devotees. When the Lord Shiva met Muruga, in Odhimalai, He came alone not accompanied by His Consort-Ambika. Hence, there is no shrine for the Goddess.

Before undertaking any new endeavours, devotees seek the approval from Lord Muruga with two flowers choosing one to know his opinion. This is called Varam Kettal – Seeking a Boon. People also pray for knowledge, wisdom and distinction in Education.

The nearest airport is Coimbatore Airport. The nearest railway station is at Mettupalayam.Devotees have to reach Puliampatti 48 km from Coimbatore on the Satymangalam Road. Irumbarai is 10 km from Puliampatti. Buses are available only at specific hours. Cabs can be hired from here to visit the temple.

The temple is open for 3 days (Monday afternoon, Tuesday and Friday), in a week during ordinary days and will also kept open of No moon day, Kiruthikai and shasti days.