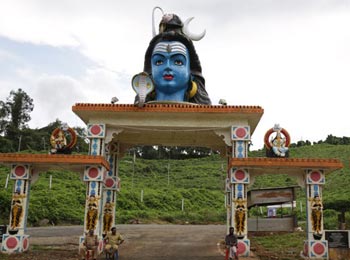 Nilakkal Mahadeva Temple is a Hindu temple located in Nilakkal, in the eastern side of Pathanamthitta district in the Indian state of Kerala. The temple is located about 15 KM east of the river Pampa and is the oldest temple in this locality.

Nilakkal Mahadeva Temple is a well-known Lord Shiva temple situated at Nilakkal in Pathanamthitta district of Kerala, India. The temple is an essential halting place or idathavalam for the thousands of devotees visiting Sabarimala Ayyappan Temple. Situated on the eastern side of Pattanamthitta, Nilakkal Shiva Temple is set in the middle of green forest and rubber plantations.

The temple is devoted to Lord Shiva. The divinity here is believed to be in dual dispositions, fierce “Ugramoorthy” and auspicious “Mangala Pradayakan”. It is also believed that Lord Siva showered his blessings to his son Lord Ayyappa to fight against all evil spirit. Like in any other Shiva temples, a number of oxen are sheltered in the temple grounds. Apart from Lord Mahadeva, the other two sub deities here are Lord Kannimoola Ganapathi and Nandi.

Three Poojas are held here every day. The morning pooja is known Usha pooja, noon as Ucha pooja and the evening concludes with Deeparadhana.

The 'Maha Shivaratri' held yearly is one of the famous festivals of the temple. Apart from Shivarathri, the temple celebrates its Thiruvutsavam every year in majestic style.

How to Reach Nilakkal Mahadeva Temple

Cochin International Airport is 136 km and Thiruvananthapuram international airport 156 km from the temple. There is also a heliport at Perunad, near Nilakkal, which operates at times of Sabarimala pilgrimage.

The nearest railway stations are Chengannur which is about 68 km and Thiruvalla which is 73 km.

Mannarakulanji – Chalakayam route (SH 67) is the main highway. It passes through Nilakkal and Adoor. Vandiperiyar highway passes through Plappally which is 8 km west to Nilakkal. During Sabarimala pilgrimage, state-owned K.S.R.T.C buses provides chain services from Pamba to Nilakkal at fair charges for the devotees. Private busses ply through adjoining places like Angamoozhy and Thulappally. Transportation is comparatively less in this region.