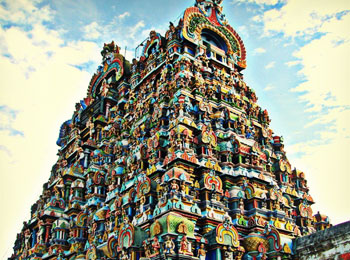 
God Shiva is known as Nellaiappar, Venuvana Nathar and the female deity known is as Kanthimathi Ammai. Pathigam was performed by Sambandar. This sivasthalam is one of the Pancha Sabha Temples made of Copper of God Shiva. This is one of the big temples in Pandiya Naadu measuring 756 in length and 378 feet in breadth. There are 2 temples at Tirunelveli, one for Lord Shiva who is known as Nellaiappar and the other one for Kanthimathi Ammai. Both the temples are situated side by side and a corridor joins both the temples. On the southern prakaram of the reigning male deity's temple, the stone statues of Nayak Kings are seen in this temple, which have made immense contributions for the development of this temple. The beautiful statue of God Arumugam (Muruga) with His 2 consorts Valli and Deivaanai sitting on His mount Peacock can be seen in the west prakaram. This statue is beautifully carved from single block of big stone.


There is a story behind the name of the town Tirunelveli. According to a legend, once there was a poor Brahmin in this town named Veda Sarma who was a great Siva Bhakta. Every day he used to go out begging and the charities thus gathered were used by Veda Sarma for offering to the God. One day, when the Brahmin had dried the paddy which he had collected for offering to Siva, it rained suddenly and Veda Sarma feared that the entire paddy might be washed away due to heavy rains. He became much worried and prayed for help to the God who took pity on him and protected the paddy from the rain by covering it and standing around it like a fence. So this place came to be known as Tiru Nel Veli - Tiru means beautiful, Nel means paddy and Veli means fence. The God also came to be known as Nellaiappar. According to yet another popular legend associated with this temple, God Shiva once took the form of a Lingam, came to Tirunelveli and resided there. All the four Vedas stood around Him as bamboo trees and provided him shade. So this place is came known as Venu Vanarn - Venu means bamboo tree and Vanam means forest and the God came was regarded as Venuvananathar.


Navaratri, Tirukkalyanam in Aippasi, (Oct 15 - Nov 15) and Arudra Darisanam are some of the important festivals here.Arudra Darisanam attracts huge crowds here. The Bhrammotsavam here lasts for an extended period of time during the Tamil month of Aani (June 15 - July 15).Also, A Golden Temple Car will run during important festivals like Thirukalyanam, Kaarthigai Aaruthra Festival. During Thaipoosam Festival in Thai, Lord Shiva and Parvathy are taken to the banks of Thamirabarani River in Tirunelveli junction called "Thaipoosa Mandapam". Special rituals are undertaken there and the Lord returns to the temple at night. Other Festivals are Prathosam Pooja, Masi Magam, Thiruvathira, Karthigai Vazhipadu, Chitra Pournami


Nearest Bus Stand is Tirunelveli Bus Stand,.This will connect all the places to Tirunelveli.