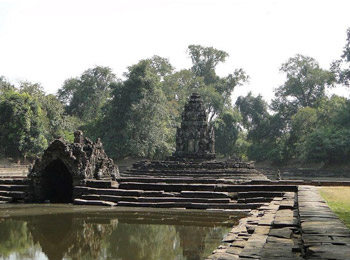 Neak Pean is one of the temples that make one dream of the olden days of luxury and beauty. It was worthwhile to the overpowering temples of Siva that men and armies repaired. Prasat Neak Pean is located in the east of Prah Khan, 300 meters (984 feet) from the road. A enter and leave from the north entrance. It was built in second half of the 12th Century by King Jayavarman VII.

Neak Pean is a large square man-made pond (70 meters, 230 feet each side) bordered by steps and surrounded by four smaller ponds. A small circular island with a stepped base of seven laterite tiers is in the center of the large square pond. Small elephants sculpted in the round originally stood on the four comers. The central tower was dedicated to Avalokitesvara. It is to the overpowering temple of Civa that men and armies repaired, but it was at the tiny temple of Neak Pean that eager princesses laid their lovely offerings of wrought gold and pungent perfumes…Fancy it as it was in the old days. To begin with there was the artificial lake, a wide extent of water in the shallows of which floated the flowering lotus.

Neak Pean is a tiny temple built during the reign of King Jayavarman VII, an energetic king who ruled in the late 12th century (for biographical details, see the Preah Khan page).The King ordered the construction of a vast baray (reservoir) east of Preah Khan temple possibly to provide water to its hundred-thousand support workers.Stretching a half kilometer by 900 meters, the artificial lake (known as the Jayatataka) stored millions of cubic meters of water to irrigate the rice fields during the dry season. Neak Pean sits at the center of the reservoir.It once consisted of a square pond, measuring 70 meters to a side, surrounded by four smaller ponds, which were in turn surrounded by eight other ponds. Neak Pean represents Anavatapta, a mythical lake in the Himalayas whose waters are thought to cure all illness. Descriptions of Anavatapta include references to four springs spewing from the mouths of a lion, an elephant, a horse, and an ox.

Access to the central chamber of Neak Pean is via a footbridge on the east side. In the middle of the footbridge is a stone horse called Balaha who was one of the incarnations of the Bodhisattava Lokesvara, who helped sailors escape from an island held by an ogress. Lokesvara also appears on the central sanctuary. The four sides of the sanctuary were originally open but at some point the north, south, and west sides were bricked up with carvings featuring Lokesvara. The numerous depictions of Lokesvara, who was known for compassion, is in keeping with the possible utilitarian aspect of Neak Pean—absent an understanding of the nature of disease, the ancient Khmers may have believed that bathing in its successive pools would have restored balance within the body and cured illness, or at least washed away sin.

Neak Pean is one of several sites described by Zhou Daguan, the 13th century Chinese emissary who visited Angkor in its heyday. However, Zhou's description of the statuary does not fully correspond to what we see today, suggesting that either Neak Pean was remodeled or Zhou misremembered.

Siem Reap International Airport (IATA: REP, ICAO: VDSR) is the second largest airport in Cambodia. Its modern architecture is based on the traditional Khmer style. There is a railway line from Phnom Penh to Poipet (Sisophon being the nearest station to Siem Reap), but no trains currently run in Cambodia. It is also well connected by road.