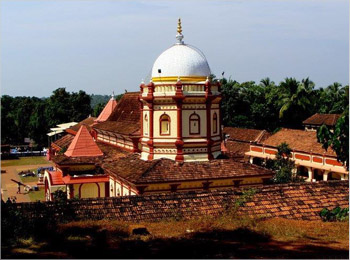 Shri Navdurga temple is situated 28 kms from Panjim at Madkai which is in Ponda.The temple is 500 year old and is dedicated to the Goddess Navadurga. The deity is originally from Ganvshi village in the Tiswadi taluka.It was renovated in 1603 AD.

The presiding deity worshipped at Madkai is a fierce form of goddess Durga known as the Mahishasuramardini (the killer of demon Mahishasur).In the centre or Garbhagriha of the temple is a stone idol of the Goddess placed on a raised platform. The idol in standing position is four feet and her peculiarity lies in her pose; that is her neck which is slightly bent to the left.

Thousands of people gather at the Shri Navdurga temple at Madkai during the month of November (hindu month of Kartika) from Vidya Chaturthi to Dashami for the annual zatra. Navaratri is also celebrated grandly here.

Goa's airport, Dabolim, is 29 km south of Panaji and has chartered flights come in from Europe and from major Indian cities such as Mumbai, Delhi, Chennai, Bangalore, Thiruvanthapuram and Kochi. From the airport, you can take a pre-paid taxi/shared taxi into town. The train station is at Margao some 39 kms away. From the station it is possible to hire taxi to take you to Panaji. The Kadamba Bus Terminal in Pato, 1 km east of the main square, is a busy bus junction with buses coming in from neighbouring Goan towns and long distance buses from Maharashtra and Karnataka.