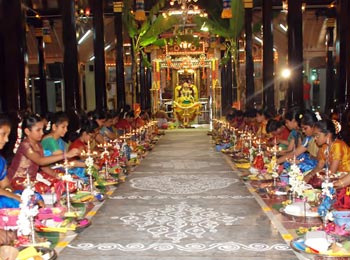 The Chettiar Temple is dedicated to Lord Murugan and is located in Penang, in Malaysia. The Nattukkottai Chettiar Temple is a temple of the Chettiar community in Penang. Its full name is Nattukkottai Chettiar Thendayuthapani Temple, and the temple is also called the Arulmigu Thandayuthapani Temple. It was originally located on Waterfall Road and stands on the road in front of it, called Jalan Kebun Bunga, today. It was founded in 1854 or so, after the Chettiar community in Penang Street bought the piece of land to build the Chettiar quarters, or Chettinar.

The word Nattukkottai is a compound noun of two words, "nattu" and "kottai", meaning "country forts". This refers to the Chettiar's acumen in amassing wealth and keeping it. Being astute businessmen and moneylenders, the chettiar build temples that are hallmarks of quality, and are usually well managed as well as financially secure. Within the chettiar quarters is the temple of Thendayuthapani, an incarnation of the deity Murugan. This temple was consecrated in 1857. It was built in the chokkatan or chequered design

A rich legend lies behind the causes of Thaipusam. Well known portrayal goes that the immense Saint, Agasthya, taught his understudy, Idumban to remove two slopes called Sivagiri and Shakthigiri having a place with Lord Murugan and takes it back to him. As charged, Idumban travelled to Mount Kailai Range where the slopes rested and lifted them up prepared to fly back. However, too bad, Lord Murugan had different arrangements. He needed to test Idumban's strength and commitment to his lord. He decreased his size, to that of a little tyke and quickly remained on one of the slopes. All of a sudden Idumban found that he couldn't convey the slopes any longer. To his bewilderment, a youngster was standing haughtily on the slope. Idumban submissively asked for the kid to get down. At the point when the tyke won't, Idumban flew into fierceness and attempted to assault him, just to wind up falling like a harmed winged animal. Master Murugan then returned to his unique self and showed up before Idumban. "I am satisfied with your valor and assurance," he said. "Your commitment to your master is splendid. I now give on you the respect of being my gatekeeper" Lord Murugan then declared that from now on, the individuals who conveyed kavadis to see him, would get his gifts. Today, a large number of Hindus convey kavadis as offerings to the Lord amid Thaipusam. The kavadis symbolize the slopes of weight that Idumban carried.

The other form was an evil spirit named Tharakasuran who was upsetting the Rishis and Saints. Ruler Muruga was called by his folks Lord Shiva and Parvati and given the employment of annihilating the asuran. Master Muruga set off with the endowments of his folks, to wreck the devil. He conveyed twelve weapons, eleven of which were given by his dad Lord Shiva and the "Vel" given by his mom Parvati. Ruler Muruga obliterated Tharakasuran on the Pusam Nakshatra day in the Tamil month of Thai and henceforth Thai Pusam is commended in all Murugan sanctuaries.

In another legend, that on a Thursday in Thai that additionally happened to be the day of Pusam star and pournami, Shiva and Parvati were occupied with a joyful vast move, as Brahma, Vishnu, Indra and the Devas viewed. This demonstrates this is a day perfect for love of Shiva.

As per another legend, as Shiva was granting a mantra to Parvati, Subrahmanya spied on them. For that blunder, Parvati laid a revile on him, in accordance with the decide that even a child, if failing, must be rebuffed. To be recovered from her revile, Subrahmanya offered hard retribution at Thirupparankundram. Satisfied with his atonement, Shiva and Parvati showed before him and lifted the revile. The day on which Parvati's revile on Subrahmanya was lifted was a Thai Pusam. It is in this way an uncommon day for love of Lord Subrahmanya. However another legend has it that Kaveri, lamenting that she had not secured the prominence procured by Ganga through her position on Shiva's locks, sat under a peepul tree on the banks of Sara Pushkarini and offered atonement to Narayana. Satisfied by her retribution, Narayana showed up as an infant in her lap. That day when he showed in this way was, once more, a Thai Pusam.

The ceremonies that are taken after are genuinely comparable. On Thaipusam day, lovers make offerings to Lord Muruga for annihilating the ills that torment us. Maybe the strongest propitiatory ceremony that a fan of Shanmukha embraces to perform is what is known as the Kavadi. The advantages that the lover picks up from offering a Kavadi to the Lord are a million-overlap more prominent than the little torment that he exacts upon himself.

The famous festival is celebrated is Thaipusam.