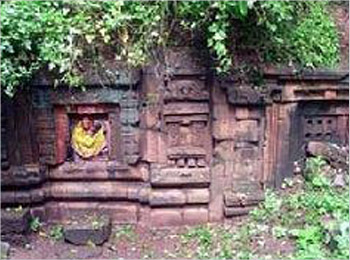 The Narayani Temple is dedicated to Goddess Narayani and is located in Narayani, near Khalikote, Orissa. The temple is popular for Durga Puja. It was renovated by the Zamindars of Khalikote in early 18th Century. The style is Khakhara Deula. It existed before 12th Century AD. The temple is known for the scenic beauty of the surrounding countryside' including Chilika Lake. 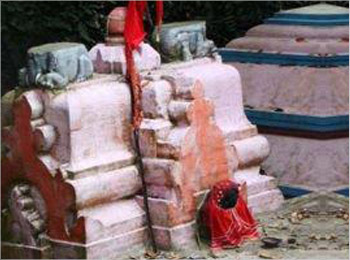 The temple’s visible segment measures about 6.75 metres in length and 4.35 metres in width. The construction maintains a unique pattern between stone pieces in the structure. It was cemented by using a substance secreted by rubbing two stone pieces. The temple is built out of sandstone. The exterior surface has a pink varnish.

Goddess Narayani (Mahisasuramardini Durga) has six hands. She is the dwelling deity of this temple. As per mythology the deity in the shrine is an aavatar of Maishamardini Maa Durga. Earlier, she was worshipped by local tribes inside the cave (khola).

The temple’s journey is associated with the former ruler of Khalikote states and expected to be built in 18th century A.D. Durga puja is one of the major celebration of the temple.

Ashokasthami is the most important festival of the hilly goddess celebrating for three days. Mesha Sankranti and Raja Sankranti are important ones. A large number of devotees visit the temple and worship to the deity during these days every year.

Instead of Ganjam you can a get flight to Bhubaneswar Airport on regular basis. There are regular trains from other major cities of the country to Ganjam. Ganjam does not have a bus stand. Nearest option is Berhampur.

Ganjam does not have a bus stand. Nearest option is Berhampur.