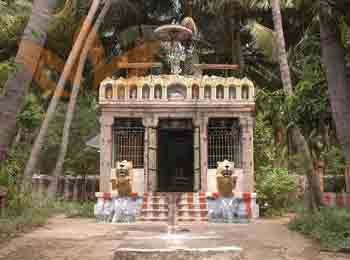 Narasinga Perumal Temple is a Hindu shrine dedicated to Lord Vishnu. The temple is situated at Mannadimangalam village, in the Madurai District of Tamil Nadu.

The chief deity of the temple is Sri Narasinga Perumal, who is one of the ten incarnations of Lord Vishnu. The deity grace from within the sanctum sanctorum in a standing posture, along with his consorts Sridevi and Bhoodevi Thayyars. Unlike most Narasimha Swamy temples, the deity here is not found with the Narasimha mukam (face), despite known as Narasinga perumal. He is seen gracing his devotees in the pleasing form of Lord Vishnu. The temple boasts of some of the finest sculptures that stands proof to the amazing skills of ancient Tamil craftsmen. Some of them includes, a sculpture depicting the ten incarnations of Lord Vishnu that is crafted in a single stone, a sculpture of an elephant and lion penancing together, etc.

Jack, plantain and Mango (known as Pala,Vazhai and Maa respectively) are the three sacred trees of the temple. Sri Andal graces from a separate shrine here with a Tulsi Mada in the front and Theertha thotti behind, just as in the world renowned Srivilliputhur temple. The temple precinct houses the shrines of Lord Vinayaka, Sri Santhana Gopalakrishnan, Saint Nammazhwar, Nagar and Devi Durga.

Sri Anjaneya and Garuda Bhagwan wished to have the darshan of Lord Vishnu’s Narasimha Avatar. The kind Lotd fulfilled the wish to Sri Anjaneya at Sholingapuram and to Garuda at Ahobilam. These two are the Dwarapalakas in this temple. The temple has no flag post (Kodimaram) or Vimana. It is believed that every incarnation of Lord Vishnu has a correlation with the planets. Devotees may worship the respective Avatar of Lord for relief from the adverse aspects of a particular planet. Lord Narasimmha is worshipped to resolve problems due to the affliction of planet Mars. Offering prayers to the Lord ensures the devotee with a hindrance free weddings.

The demon king Hiranya performed severe penance towards Lord Shiva. Having impressed the Lord, Hiranya sought a complicated boon from Lord Shiva that he could not be killed by humans, Gods, Devas, demons, birds nor animals. He also got a boon that he could neither die in the morning, noon nor night. Having bestowed with such a boon, Hiranya grew into a tyrant who promulgated himself as the supreme God. He mercilessly punished everyone who opposed him and wanted everything under his control. To his utmost displeasure, his very own son Prahaladha disagreed with his father’s policies and worshipped none other than Lord Narayana. Having tried all means to change his son which ended up futile, Hiranya decided to punish his son and thus made several attempts to kill him. The kid somehow managed to escape the clutches of his father every time with Lord Vishnu’s blessings. The final confrontation between the father and son took place at dusk (neither day nor night). Hiranya demanded that his son show him his much believed Lord Narayana for which the boy replied that the Lord is everywhere. Hiranya then pointed at a pillar and asked if the Lord is there within it. That is when Lord Vishnu appeared from the pillar in the fierce form of Narasimha (human body and Lion face). He carried Hiranya and placed him on his lap. He used his sharp nails as a weapon to tear him apart and killed the demon king, thus bringing an end to adharma.

The revered occasion of Vaikunda Ekadasi and the Tamil month of Margazhi ( December-January) are considered special for the worship of Lord Vishnu. Hence, special poojas are performed to the deity on the above days. The Karthikai Deepam festival which falls in the Tamil month of Karthikai (between November-December) is another prominent festival celebrated here .

Devotees visit the temple and pray Sri Narasingha Perumal here with the hope that the Lord’s blessings would relieve them from all the obstacles pertaining to various spheres of life such as wedding, progeny and Sevvai Dosha (adversities caused by planet Mars).

The nearest railway station is the Solavandan Railway Station.

Mannadimangalam is 30 km from Madurai and 3 km from Solavandan. Buses plying between the Madurai Central bus stand to Kuruvithurai passes through this place.