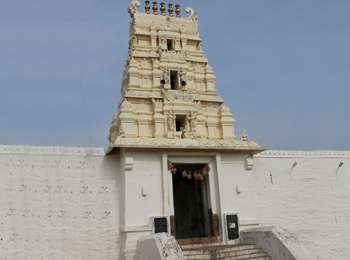 The deity of God Vishnu is worshipped at the Narasimha Swamy Temple which is located at Sibi in Tumkur, Karnataka. The region of Sibi is situated 20kms north of Tumkur City on National Highway 4. The deity of God Narasimha is enshrined in the temple which is known to be an incarnation of God Vishnu. The temple is protected by the Archaeological Survey of India under the Karnataka State Division. 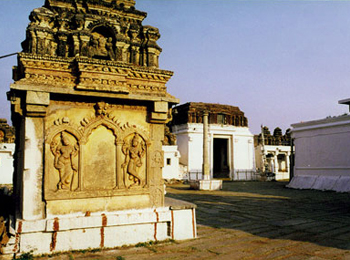 The temple’s entrance is decorated with a large prakara and a three tiered tower. It consists of a large court yard, an open mantapa, a closed mantapa and various small shrines where deities of God Rama, God Ambegal Krishna, God Narasimha, God Sriranga, God Saptamatrika and God Ganesha are installed.

The Mukhamantapa that is the entrance hall is decorated with mural paintings that represent several religious themes of Hindu Puranas like the Bhagavata, the Ramayana, the Mahabharata and the Narasimha Purana. These murals are based on the same artistic idiom that is seen in the Daria Daulat Bagh murals in Srirangapatna. A critic named Veena Shekar expressed that the mural paintings are folkish in character as the art migrated to Karnataka over the years. An art historian named George Michell described these murals as the best from the Mysore era.

The paintings and murals are divided in three rows on the wall and the ceiling. The first row shows the Krishna Leela, the second one depicts a scenario from the court of Maharaja Krishnaraja Wodeyar III along with Nallappa present in it and the third row represents the court of Haidar Ali where Tipu Sultan, Kacheri Krishnappa, Ravanappa and Venkatappa were also present. The critic, Beena Shekar expressed that the portrait of Maharaja Krishna Raja Wodeyar III dates back to the early 19th century.

As per the legend, one day a merchant was carrying grains on a bullock cart and halted at Sibi. The merchant boiled the grains on a projecting rock for his meal but soon noticed that the water had turned blood red. This shocked the merchant and his attendants. After a while, as the merchant was sleeping God Narasimha appeared in his dream and informed that he has desecrated his abode on the rock. The God asked the merchant to build a temple as a form of penance. This is how the temple was established. In the later era, three sons of Kacheri Krishnappa named Puttanna, Nallappa and Lakshminarasappa took upon them the consecration of a larger temple. As per the belief, God Narasimha appeared in Nallappa’s dream and promised him happiness after asking him to build the temple. The temple was built in 18th century and depicts a Dravidian structure.

How to Reach Sibi

HAL Bangalore International Airport is nearest to the temple. This airport is also known as Hindustan Airport.

Frequent road transport is available from Tumkur and Sira till Sibi.