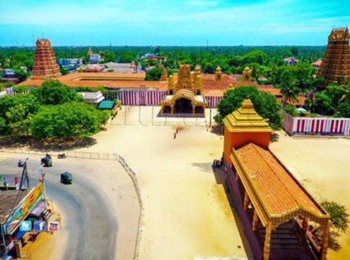 Nallur Kandaswamy Kovil is one of the most significant Hindu temples in the Jaffna District of Northern Province, Sri Lanka. It stands in the town of Nallur. The presiding deity is Lord Murugan in the form of the holy 'Vel' in the Sanctum, the primary shrine, and in other forms, namely, Shanmugar, Muthukumaraswami, Valli Kaanthar with consorts Valli and Deivayanai, and Thendayuthapani, sans consorts in secondary shrines in the temple. 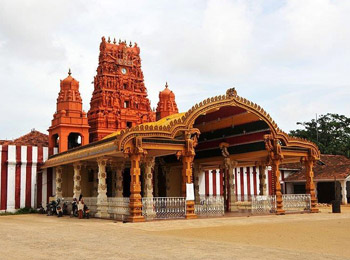 The temple has the main entrance facing the east. It has an ornately carved five-story tower or gopuram in the Dravidian architecture style at the main entrance. In the surrounding inner veethy or circumbulatory path, it has shrines for Lords Ganesh, Palliyarai, Sandana Gopalar, Goddess Gajavalli Mahavalli, Vairavar and Sooriyan with Consorts, and Vairavar. In the southern part of this temple, the holy pond and Thandayudhapaani shrine can be seen. In the northern side, one finds the 'Poonthottam' the holy garden. 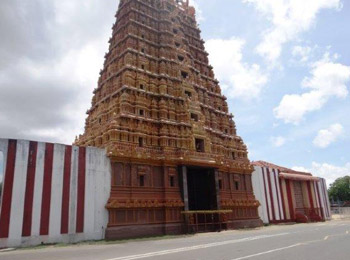 The presiding deity is Lord Muruga (son of Lord Siva a.k.a. Karthikeya) in the form of the holy Vel. The idol of the Nallur Devi or goddess was gifted to the temple in the 10 century AD by the Chola queen Sembiyan Mahadevi, in the style of Sembian bronzes.

The original, Kandaswamy Temple was founded in 948. According to the Yalpana Vaipava Malai, the temple was developed at the site in the 13th century by Puveneka Vaahu, a minister to the Jaffna King Kalinga Magha. Sapumal Kumaraya (also known as Chempaha Perumal in Tamil), who ruled the Jaffna kingdom on behalf of the Kotte kingdom is credited with either building or renovating the third Nallur Kandaswamy temple. Nallur served as the capital of the Jaffna kings, with the royal palace situated very close to the temple. Nallur was built with four entrances with gates. There were two main roadways and four temples at the four gateways. The present rebuilt temple that exist now do not match their original locations which instead are occupied by churches erected by the Portuguese. The center of the city was Muthirai Santhai (market place) and was surrounded by a square fortification around it. There were courtly buildings for the kings, Brahmin priests, soldiers and other service providers. The old Kandaswamy temple functioned as a defensive fort with high walls. In general, the city was laid out like the traditional temple town according to Hindu traditions. Cankilian Thoppu, the facade of the palace of King Cankili II, can still be found in Nallur. The third temple was destroyed by the Portuguese Catholic colonial Phillippe de Oliveira in 1624 CE. The fourth and the present temple was constructed in 1734 A.D. during the benign Dutch colonial era by 'Don Juan' Ragunatha Maapaana Mudaliyar, who served as a Shroff in the Dutch Katchery, in a place identified then as the 'Kurukkal Valavu. Krishnaiyar a brahmin, served as the first priest of the temple. Initially the temple was built using bricks and stones and had a cadjan roof, enshrining a 'Vel' in the middle. The original shrine had only two small halls. The start of the 'Golden Period' in the history of Nallur Temple is recorded as post 1890, soon after the taking over the temple administration by Arumuga Maapaana Mudaliyar, the 7th Custodian. The first Bell tower was erected by him in 1899 and he made many improvements to the temple including the main Sanctum, renovating it using granite to pave the floor of the Sanctum in 1902. The first enclosing wall was erected in 1909 by him. Likewise, the temple has been gradually renovated from time to time by his successors to date. After the year 1964, the year the present and the 10th Custodian , Kumaradas Maapaana Mudaliyar took over office, extensive improvements have been made to date, virtually rebuilding the entire complex and making it physically the largest Hindu Temple Complex in the country. The custom of annual 'Thiruppani', introduced by him, has seen the temple growing into its present splendor. Today the temple has four Gopurams and six Bell Towers, along with its fortified walls, giving it an appearance of a citadel in Nallur.

The temple hosts the annual festival which begins with the hoisting of the Holy flag – the Kodiyetram. The cloth for hoisting is ceremonially brought to the temple in a small chariot from a family belonging to the 'Sengunthar' dynasty, for centuries. The festival is spread over a period of twenty five days during which various Yāgams Abishekams and special poojas are conducted. The major religious festivals people flock to witness are the Manjam, Thirukkarthikai, Kailasavahanam, Velvimanam, Thandayuthepani, Sapparam , Ther – The Chariot festival, Theertham – the water cutting festival, and Thirukalyanam – The holy wedding. The Ther Thiruvila (chariot festival) is the most popular of all events is very colourful and commences at 6.15 am. The glamorously dressed Lord Shanmuhar and his consorts are carried out on a Silver Throne called 'Simmasanam', an intricatetly carved masterpiece created by the 7th Custodian, Arumuga Maapaana Mudaliyar in the year 1900. Hundreds of devotees carrying it on their shoulders, and the Simmasanam which floats on the heads of thousands of devotees shouting 'Aro hara' is a sight not to be missed.

The huge and heavy chariot carrying the statue of God Shanmuhar and consorts is paraded along the streets of the Temple. The chariot pulled by a rope of thousands of devotees, rich and poor, old and young stand shoulder to shoulder in pulling it giving God Murugan the opportunity to witness the sincerity and purity of the devotees.

Sri Lanka is accessible by ship and by air. It has an extensive railway system serving most major towns and cities in the island.