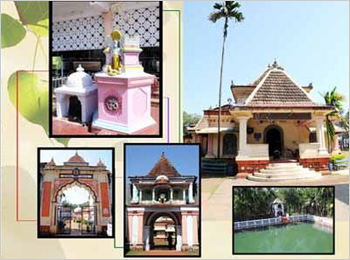 The Naguesh temple, one of the early Hindu temples in Goa, is dedicated to Lord Naguesh, a manifestation of Lord Shiva. Based on a stone inscription found close the shrine, the roots of Sri Naguesh temple can be traced back to 1413, when the area was under the reign of Veer Pratap Devraya belonging to the powerful Vijayanagar Empire.Unlike most of the Hindu temples in Goa, the Naguesh Temple was secure from the risk of being oppressed by the Portuguese. The temple has been in existence in its original site for centuries. The current edifice of temple is the result of a wide-ranging restoration process that was undertaken in the year 1880. The temple Sabhamandap has a galleria on either sides that comprises complicated wood artifacts portraying the events of Ramayana on one side and wooden images of Astadikpal and Gandharva on the other. 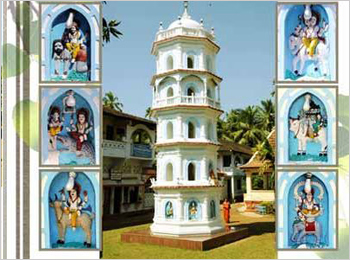 Nagueshi or Nagesh is a form of Lord Shiva worshipped by Hindu Goans in India. The temple lies in verdant surroundings in the Ponda district of Goa.

There are stone idols of Shiv-Paravati and Ganesh inside the temple which actually date back to the seventh and eight century which has led to the conjecture of the temple being in existence since that time. The present day building is a recent construction having been renovated and patched up around the year 1880.

The temple has a magnificent ancient tali (water reservoir) surrounded by palms. The reservoir is built in such a way that standing at a certain location around the tali, a person can view the mirror image of the idol of Lord Naguesh and the well-lit lamps in the inner shrine.

The temple has lately barred entry of foreigners into the temple citing objectionable dressing and conduct as the reason. 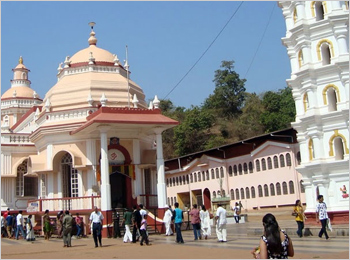 The temple is dedicated to Lord Naguesh, who was known as Nagnath in olden times. Lord Naguesh is another manifestation of Lord Shiva. The vibrant images of gods and goddesses around the base of the deepstambha (lamp tower) are a treat to one’s eyes at the temple. 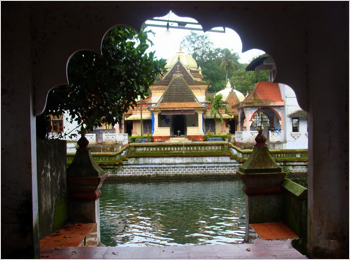 The history of the temple is not obtainable at present, apart from a mention in the folk songs. The localities known as Nagzar had in the past a grove of Shami trees. As the legend goes a cow-boy observed that a cow from his herd used to regularly visit the place and poured milk. When he went to take a closer look, he happened to discover a Shivlinga at the spot here the cow showered the milk.

A unique feature of Devasthan is that it remianed unaffected by the religious oppression of Portuguese rulers in the 16th Century. This was because at that point of time Antruj of Ponda Mahal was not under the realm of the Portuguese power and this enabled the transits of Saraswat deities Shri Nagesh, Shantadurga, Ganapati etc. to Antruz & Bhatagram (Dicholi). In the complex of the Devastan, there is an engraving, which is an acknowledged manuscript about the the distant past of this shrine. It recounts about the gift of lands, by 'Vedakhandikechem Kulagar', 'Nagzri Mallo, paddy field & 'Ruvo Kulagar' in favor of the divinities of Shri Nagesh & Shri Mahalaxmi for sevas on Kartik Poornima by Shri Mayeen Shenvi Wagle, an officer of the kingdom, in the year 1413 A.D. or 1335 Saka, during the rule of King Veer Pratap Devaraya of Vijay Nagar. During that time, Shri Nanjan Gosavi was the Governor of Goa. In those days the god was known as Nagnath, as specified in a copper plate, bearing the year 1229 Saka, found in Savai Verem. One stone effigy of Uma - Mahesh and one of Ganesh had been found in the temple complex. From the style of the carving the Archaeologists are of the judgement that they should be belonging to the Seventh and Eighth century respectively. Hence, it is beyond any doubt that the temple was here much before the Seventh Century.

The Naguesh temple is located 4 km east of Ponda, off the NH 4A connecting Ponda to Panaji.