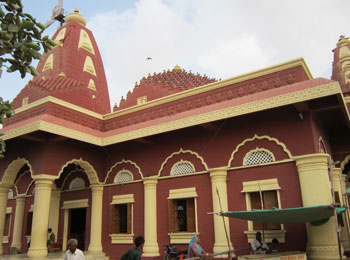 Nageshwara temple of Lord Shiva is located in Daarukavana, in Gujarat, India. Gujaratis, the local people of the state believe guests are god's in disguise and that sentiment embodies in their welcome line Aavo Padharo. The localities are very friendly making you feel like coming back to this state time and again.

Gujarat's coast line in 16666 kms along the Arabian Sea and desert. It is the home state of Mahatma Gandhi, the Father of Nation. It is renowned for its temples, historic capitals, wildlife sanctuaries, hill resorts, scenic backdrops and beaches. The state has rich cultural heritage, Sculptural art, festivities and handicrafts. Gujarat is also among the most technologically advanced, state as it houses the largest petrochemical complex in the country. The state has always been a significant centre for the Jain community. Jain Temple centres at Palitana and Girnar Hills are the major religious places for Jains. Gir forest, the only habitat of the Asiatic Lions in India is a well-known tourist spot and none miss to visit it during their visit to state. A memorable desert ride at the Wildlife Sanctuary and the beautiful Indo-Saracenic Architecture of Ahmedabad is not to be missed. The tribal villages of Kutch desert are very vibrant and make your visit unforgettable one.

Nageshwar Temple or Nagnath Temple is located en route Gomati Dwarka and the Bait Dwarka. An island on the coast of Saurashtra in Gujarat. The enshrined Jyotirlinga in the Temple of Nagnath is known as Nageshwar Mahadev and attracts thousands of pilgrims all round the year. This powerful Jyotirlinga symbolises protection from all poisons. It is said that those who pray to the Nageshwar Linga is freed from all ill effects of the poison. The Rudra Samhita sloka refers to Nageshwar with the phrase ′Daarukaavane Naagesham′.

The idol of the deity, Nageshwar Mahadev Sivalingam is facing South while the Gomugam is east facing.

According to Shiv Purana, a Shiva devotee by name Supriya was attacked by a demon Daaruka while in a boat. The demon imprisoned him along with several others at his capital Daarukaavana where he resided with his wife Daaruki. Supriya advised all prisoners to recite the mantra ‘Aum Namaha Shivaya’. When Daruka came to know about this he ran to kill Supriya. Instantly Lord Shiva appeared in the form of a Jyotirlingam and killed the demon with the Paasupataastra, a divine weapon. This Jyotirlinga manifestation of Lord Shiva is worshipped as Nageswara. Two other sites in India, one near Audhgram near Purna in Andhra Pradesh and another near Almora in Uttar Pradesh also enshrine temples to Nageswara Jyotirlingam. According to the Shiv Purana, any person who with utmost devotion reads the enshrinement and the greatness of this Jyotirlinga shall gain all material happiness and divine bliss at the end of life.

There is a story of a devotee by name Naamdev who would sing bhajans standing in front of Lord shiva. Other devotees asked him to step aside and not cover the Lord. To this Naamdev asked them to suggest one direction in which the Lord does not exist, so that he can stand there. The enraged devotees took him to the south side and left him there. When they returned, to their astonishment, they found that the Lingam was now facing South and the Gomugam was facing east.

The best time to visit Nageshwar Jyothirlinga Temple is in the winter, between October to March. The weather would be pleasant and temperature ranges from 20- 28 degree centigrade.

Dwarka is a station on the Ahmedabad-Okha broad gauge railway line, with trains connecting it to Jamnagar (137 km), Rajkot (217 km) and Ahmedabad (471 km), and some trains that continue all the way down the coast through Vadodara, Surat, Mumbai, Goa, Karnataka, to the southern tip of India in Kerala.