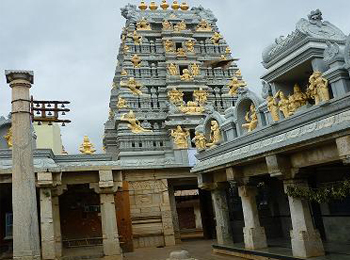 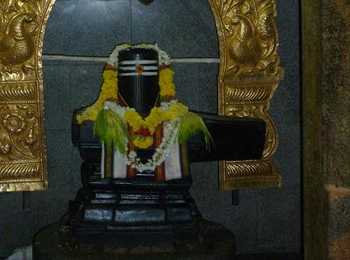 The temple was said to be built by the Cotton merchant, Sri Appayyashyamappa and Parvathamma who were involved in the trade of cotton export to foreign countries. They are said to have constructed this temple from the earnings received from a year’s cotton trade. Sir M.Visvesvaraya and his mother came for the temple’s inaguration, by walking all the way from Muddenalli and received a silver coin as dakshine.

Due to some unknown reasons, this temple was shut for more than 40 years and was opened only on the day of Deepavali. On 21st January 1999, few youths from the Nagartha community formed the Ayodhyanagara Shivachara Vaisya Nagartha Yuvaka Sangha and took the initiative to renovate the closed temple. After the reopening of the temple, various sacred rituals for Lord Sri Nagareswaraswamy and Lord Sri Adinarayanaswamy are performed regularly.

During the second phase of renovation, the Rajagopura with Panchakalasas was repaired and sahasra kumbhabhisheka was conducted. The committee had 11 trustees to look after day to day activities of the temple and too safeguard the valuables of the temple that are offered by the devotees. Sri Nagareswaraswamy Prarthana Mandira was established to aid the society and as a source of income to maintain the temple.

How to Reach Bangalore

Bengaluru is a metro city which is well-connected by regular flights from Delhi, Mumbai and many other cities in India. Taxis can be hired from the airport to reach Vijayapura which is located the rural Bengaluru district.

Bengaluru is well-connected by numerous buses from cities like Goa, Mumbai, Pune, Coimbatore and Mangalore. Various State transportation buses as well as private buses plies regular services from many major towns and cities.