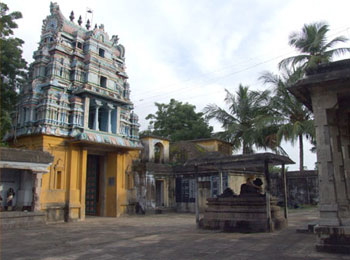 Natutharinaathar Temple is a Lord Shiva temple located in Tamil Nadu.The temple is among the 276 Thevara Paadal petra sthalams.In the inner paved corridor the sanctums of Lords Sundareswarar along with six types of Muruga,Vinayakar, Durgai, Lingodhbhavar, Karpakanaathar, are found. Between the Naalvar next to Sani Bhagawan, two seem to be Thrujnanacampantar besides two as Appar. The further two are not to be seen. 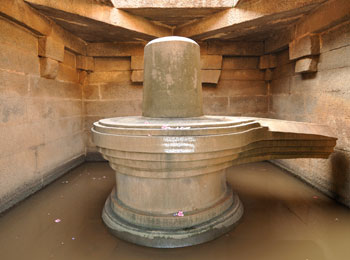 This temple having 3 tiered Rajagopuram is east facing.The external prakaram is spacious which comprises of a platform called Thirumaaligai paththi where we treasure many shivalingas. In the Deva Goshtam Dhakshinamurthi is splendid.On both sides he is bordered by Chanakaathi Rishis as found everywhere. However the uncommon accompaniments here are the idols of Saints Sambandar in dancing position plus Appar on one side besides Adhikaara Nandikeswara using folded hands standing along with his wife. Surya, Bhairava and Saiva Acharyas are on the western platform of the prakaram.Facing south is the ambal monument.

Appar Padigam all the ten hymns are engraved in a stone slab and set up in the Mahamandapam.few decades ago the Temple was renovated in granite by Naattukottai Nagarathaar. Due to its neatness, it boons a divine atmosphere to the followers. The Prime Deity here exposes as a self-manifested Deity called Swayambu Murthi. The ax-injury can be seen in the head of Natutharinaathar. Whole land in this city is as Recorded Settlement (patta) in the label of Arulmigu Natutharinaathar. Any individual member has no land as Recorded Settlement. Compared to the holy places like Thirukkaalaththi, Chidambaram, Keelvelloor and Naakaikkaaronam, Kanraappur is reflected to be more important. It is supposed that praying twice to the Deity here is like worshipping all the holy Lord Siva places of in the world. To walk across this sacred place is to get the blessing of living in this place. 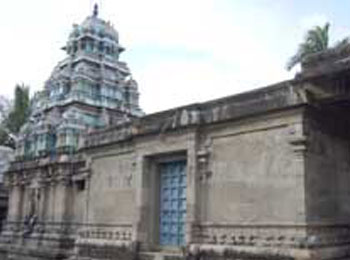 One time Lord Siva and his wife Uma Devi was in Mount Kailash. In the leadership of Lord Brahma the devas were carrying on their job of conception. A vidhyadara girl,Sudhavalli, acted as Goddess Uma before the Lord and made him happy. Goddess Uma got angry on seeing Sudhavalli taking her form and cursed her to take birth on this earth. Sudhavalli who was unknown to the consequences felt very sad and shivered. Then Goddess her that she could prayu to Lord Siva on the earth and then reach their abode. Sudhavalli similarly reached the southern Tamil Nadu and on the southern part of Thevoor was born in the traditional saiva vellala lineage and was growing as a girl with abundant Sivajnana, Kamalavalli. She was brought up in the Saiva tradition, continually worshipping Lord Siva, unending her dedication of her previous birth. When she attained marriageable age, she got married to a Vaishnavaite and settled near Thiruvarur.She was unable to resist worshipping Lord Shiva against the demand of her husband.Still,she continued her devotion in the cattle shed behind her house by supposing the axis to which the calf was tied as a representation of Lord Shiva.

The husband got angry and moved on to cut the axis with an axe. Blood oozed out of the wedge.To the contentment of the girl, the Lord appeared from the axis Kanru Aappu to show that he is ever-present.The Murthi is consequently called Naduthari nathar. In Sanskrit it is called Vathsa Sthamba Natha where Vathsa means calf. Today also the deep scratch made by axe is found on top of the Linga murthi.To make every one aware of Kamalavalli's bhakti, Lord Siva established as Lingam in that wedge. Both Kamalavalli as well as her husband attained mukti and reached the abode of Lord Siva. As the wedge of the calf converted into a Lingam this sanctified place was called Kanraappur. Although the Lingam looked as a swayambu murti, the Lord came to be known as Natutharinaathar as he came out of the wedge. 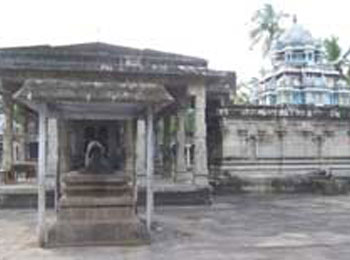 Poojas are performed five times a day. A grand festival is conducted for three days during Vaikaasi Visaakam. For the Utsava Deity here, Mariamman (Seethlaambikai), during the month of Chithirai every year for ten days, an ostentatious festival is celebrated. 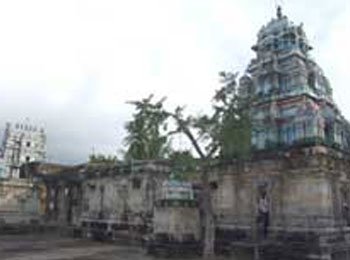 Once the prayers are fulfilled, the devotees perform abishekam to the Lord and adorn Him with new clothes.

A person living in this sanctified city also conducting a righteous life is blessed with good spouse, children in addition rich recompense.All sins get abolished by just pronouncing once the name Kanraappur.A Saivite family girl Idumbaasuran, Parvathi Devi and a disciple of Medhaavi maharishi, Dharma sarma have also worshipped the Lord.

The nearest railway station is in Thiruvarur.

On the way from Thiruvarur to Thiruththuraipoondi, the temple is 7kms. east of Mavoor bus stop. From Thiruvarur via Ettukkudi, we can get down at Koil Kannaappur stop to go to the temple.