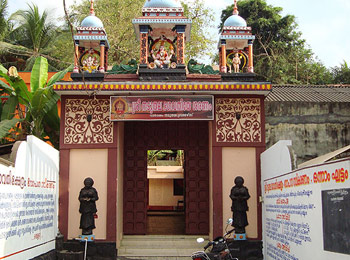 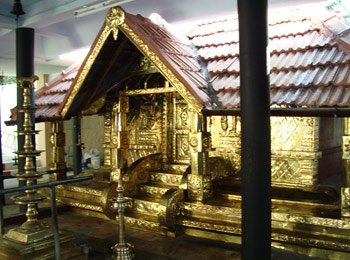 The Divine Mother known as Naduthala Bhagavathi is the form of Durga Devi. Apart from the main deity, the temple complex consists of temples for Ganesh, Muruga, Nagas and other small deities. The pleasant atmosphere gives mental peace and harmony. This temple has a long history.


History of this temple is that the male head of the Naduthala veedu family installed the deity of Devi as goddess of martial arts. Yogishwaran, Manthira Moorthi, Shakti Swaroopan, Brahmarakshas, Bhoothathan, Marutha are other deities of the temple.

One of the main offerings of the temple is pori (puffed rice) which is made by roasting rice harvested from the temple paddy fields. Earlier, the people worshiped a sculptured wooden seat and deer’s horn. Later a concrete idol of Devi was installed in front of the wooden top and was worshiped. As time passed the idol got damaged. The idol was replaced with a new one and the wooden top and deer horn were burnt in fire. A Ganapathi idol was also placed south to the main deity.

It is believed that the Devi and Lord Mahadev of Kushakodu share a husband and wife relation. As per the directives of Sage Kusava, the Devi goes to Kushakodu temple riding atop an elephant once in every 3 years. On the way to Kushakodu temple, Devi alights at Kalmandapam and is offered puja from aayirvallikavu. On arrival at Kushakodu temple, Devi goes around the temple and is kept opposite to Mahadev and lamps are lit before the idols. After evening puja, the Devi departs Kushkodu and leaves for the Naduthalla temple. There is a belief that Mahadev sends his body guards along for safety. After Devi reaches the temple they return to Mahadev after feast and songs. After Devi enters temple puja is offered to the Devi whose image is made on the floor by colour powders. This is the only moment when women are allowed to worship the deity in the sanctum sanctorum of the temple. After that the image is erased by the head priest using a betel nut Inflorescence.


The nearest airport is Trivandrum Airport.