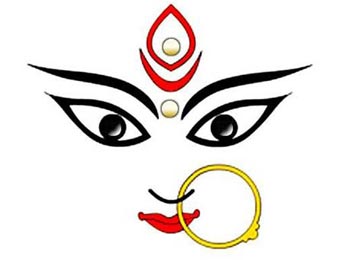 The temple of Muthumari Amman is situated in Manalur, in the district of Thanjavur, Tamil Nadu state, India. This temple is said to be around 500 to 1000 years old. The reigning deity of the temple is Goddess Muthumari Amman, a form of Shakti.

The temple is located in the middle of rivers Cauvery and Kollidam. The shrines for Lord Vishnu gracing with his consorts Sridevi and Bhoodevi and Lord Maha Ganapathy are found in the outside of the temple. Inside the temple garbagraha, Sri Mariamman blesses the devotees and is seen with a crown of fire and hold weapons in her eight hands. Pachaikali and Pavalakali are in front of the Goddesses’ shrine as dwarapalakis-the gate keepers.

Being located in the middle of two rivers, Manalur had to face heavy floods during monsoon putting the residents to untold sufferings. The chieftain governing this place pleaded with the Goddess to protect the subjects from the monsoon devastations. The rain receded and people were saved. As a token of his gratitude, he built this temple and named it as Manalur-place of sand, brought by floods.

A farmer, while ploughing his land, could not take off his plough as it got stuck in a place. To retrieve the plough, he started digging the place with the help of others. While doing so, he discovered an idol of a Goddess. The Chief of the village came to the place upon being informed about this discovery. He draped the idol in a piece of cloth and took it to his place. The Chief and the villagers were confused as to what to do with the idol and where to install it. So, till it was decided, they kept the idol packed as it was. After this incident had happened, a little girl appeared in the dream of a devotee and after identifying herself, went into the temple. They understood that she was Mariamman. When they opened the package, they found the idol of the Goddess with measles pearls all over the body. They installed the deity and named Her Muthu –Pearls- Mariamman.

The significant festivals are Shivrathri in February-March and Kappu Kattu. The utsavar (Procession) deity starts her journey the next day of Shivrathri to other nearby places as Punnainallur, Kumbakonam and shall return after 42 days. The festival shall start in Chithirai (April-May) on the first Monday. Next Monday, a ceremony called ‘Chedil Suttrudhal’ is followed by hanging a lamb in front of the temple. Those realizing their wishes carry Milk Pots and Kavadi during this festival.

Month of Aavani (August-September) is the time when the rains begin. This is the period when harmful organisms and beings start growing and spreading. In order to protect the family form being affected by these, people pray for the safety of their family in general and husbands working in fields in particular. Women observe fasting on Sundays. Special pujas are performed for the Goddess on such Sundays followed by procession.

Devotees prepare koozhu (porridge)e and offer it as nivedhana to the Goddess. Those who have wishes to be fulfilled, offer palkudam (milk pots) and Kavadi to Sri Mariamman.

Majority of devotees are those who are affected by measles. As a practice, in other places, these patients stay in their homes and bath in water heated in sunlight. In Manalur, they come to the temple complex itself for the stay and have a bath hoping that they will be cured quickly as they are under the direct view of Goddess Muthumariamman. People affected with Measles collect rice from houses as Dhan, bring it to the temple and cook the porridge, offer it to Goddess as nivedhana and distribute to others as Prasad.

Women in quest of child boon and pregnant mothers pray to Mariamman for safe chid birth offer bangles to dwarapalakis. Also those suffering from measles pray to the Goddess.

Bus services are available to reach Manalur from Thanjavur.