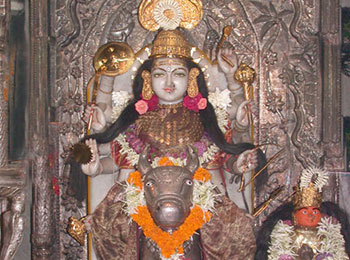 The Mumba Devi Temple is located in Mumbai and is dedicated to Goddess Mumba. This temple is estimated to be around six centuries old. 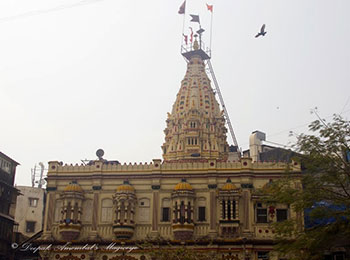 The Mumba Devi Temple is located in Mumbai and is dedicated to Goddess Mumba. This temple is estimated to be around six centuries old.

Then a new temple was built at the same place at Bhuleshwar. The Goddess personifies Mother Earth and is revered by the population of western and southern India. The modern shrine includes an idol of the Goddess Mumbadevi dressed in a robe with a silver crown, a nose stud and a golden necklace. To the left a stone figure of Annapurna is seen seated on a peacock. In front of the shrine is an idol of a tiger which is the Goddess's vehicle. The present name of the city is derived from the Goddess Mumbadevi. The temple, though not architecturally impressive, is an important landmark as it is dedicated to MumbaDevi, the city's patron deity. According to a popular legend the structure of the temple is believed be the handiwork of Mumbaraka, a sadistic giant who frequently plundered the city in those times. Terrorized, the locals pleaded with God Brahma, Creator of all things to protect them. Brahma then pulled out of his own body, an eight armed goddess who defeated Mumbaraka. Mumbaraka begged Her to take his name and then he built a temple in her honour. Mumba Devi Mandir, or Mumba Devi Temple is an old Hindu temple in the city of Mumbai, dedicated to the goddess MumbÄ, the local incarnation of the Devi (Mother Goddess). Marathi MumbÄ derives from Sanskrit MahÄ-AmbÄ "Great Mother", and MumbaÄ« combines the name with aÄ«, the Marathi word for "mother".

While Hindu sects devoted to the goddess Mumbadevi are attested to as far back as the 15th century, it is said that the temple was built in 1675 near the main landing site of the former Bori Bunder creek against the north wall of the English Fort Saint George by a Hindu woman also named Mumba. The creek and fort are now deteriorated to a point at which they are but derelict reminders of the city's past. The temple, on the other hand, is still active. The goddess Mumba was patron of the agri (salt collectors) and kolis (fisherfolk), the original inhabitants of the seven islands of Bombay. She is depicted as a black stone sculpture in the temple. An etymology of Mumba that is popular is "Maha Amba," or "Great Mother," one of the many of India's more well-known names for the Hindu Mother Goddess (Devi). Located in Bhuleshwar area in South Mumbai, the temple is in the heart of the steel and clothing markets. It is a sacred pilgrimage spot and place of worship for Hindus and is thus visited daily by hundreds of people. It is not uncommon for visitors of Mumbai to pay their respects at the temple and is one of the popular tourist destinations in the city. Mumbadevi Temple Maharashtra, Maa Mumbadevi temple is another Sakthi temple situated in Bombay. The name of the city Bombay (now called Mumbai) is derived from Maa Mumbadevi. Mumbai. This temple is dedicated to city's patron Goddess Mumbadevi. The temple of Mumbadevi, once stood on the site of the present Victoria Terminus in the central island which was called Mumbai. The temple was built in honour of Mumbadevi, the patron goddess of the Koli fishermen believed to be the original inhabitants of Mumbai. The original temple was built in 1737 was demolished and a new temple erected in its place at Bhuleshwar. The nearest station is Marine Lines. Although the Mumbadevi Temple is not as striking as others are in the city, its resident deity, Mumbadevi, is the city's patron Goddess. The structure is about six centuries old, believed to be the handiwork of Mumbaraka, a sadistic giant who frequently plundered the city at the time. 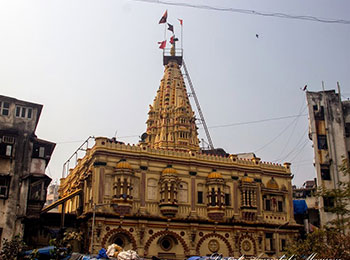 It is dedicated to MumbaDevi, the city's patron deity. 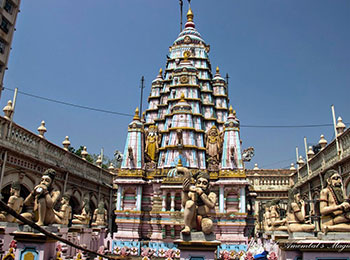 According to a popular legend the structure of the temple is about six centuries old and it is believed to be the handiwork of Mumbaraka, a sadistic giant who frequently plundered the city at the time. Terrorized by these unwelcome visits, the locals pleaded with Lord Brahma to protect them. Brahma then "pulled out of his own body", an eight armed goddess who vanquished the Mumbaraka. Brought to his knees, Mumbaraka implored the goddess to take his name and built a temple in her honour. She still stands there, an orange-faced goddess on an altar strewn with marigolds: devotees believe that those who seek her divine favour are never disappointed

One can hire auto-rickshaws or taxis to Bhuleshwar where the Mumba Devi Temple is located.

One can reach Mumba Devi Temple easily by boarding local trains from the city. The Charni Road Station is only 10 minutes from Bhuleshwar. Churchgate Station is also located close to Bhuleshwar.

On Mondays the temple remains closed.