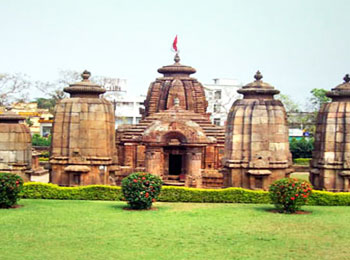 Mukteshwar Temple is a 10th-century Hindu temple dedicated to Shiva located in Bhubaneswar, Orissa, India. The temple is a monument of importance in the study of the development of Hindu temples in Orissa. The stylistic development the Mukteshwar marks the culmination of all earlier developments, as seen in such temples as the Raja Rani Temple and Lingaraaj temple, both located in Bhubaneswar. It is one of the prominent tourist attractions of the city.

This architecture is one of the basic reasons why Mukteshwar Temple is also known as the "Gem of Orissa architecture". The temple faces west and is constructed in a lower basement amidst a group of temples. The temple is a small one compared to other larger temples in Bhubaneswar. The temple is enclosed within an octagonal compound wall with elaborate carvings on it. It is believed that the experiment of newer pattern in the temple showed a mature phase compared to its predecessors and culminated the beginning of replication of similar pattern in the later temples in the city.

It is believed that the Somavamshi king Yayati I built the temple. He also associates the legend of Kirtivaasa to this temple, but the postulation is not accepted as Kirtivaasa is associated with Lingaraaja, though both were built at the same time for the same deity, Shiva. There is no historic evidence to conclude that Yayaati had built the temple.

The Biju Patnaik airport in Bhubaneswar is the only civil airport in Orissa.

The city is well connected with the road network.